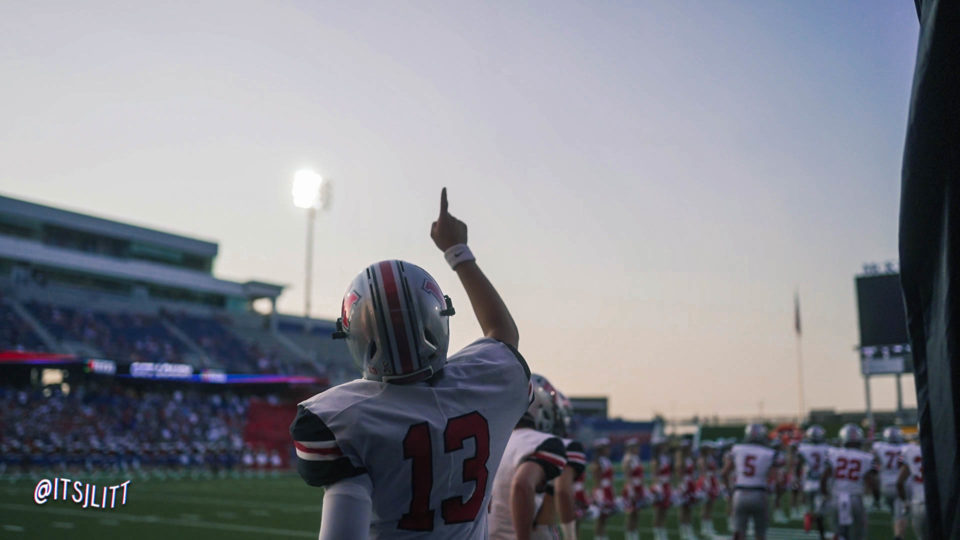 The Marauders took care of business last night at the homecoming game, getting the shutout win over the Irving High School Tigers 60-0. This put them in 1st in the district.

A key player was senior running back Ty’son Edwards, who found the endzone four times.

“[I] went out there and did everything I could,” Edwards said “[I] turned on the gas.”

Junior quarterback Garrett Nussmeier found senior running back Ty’son Edwards to score a 12 yard touchdown and two point conversion.  This put the Marauders in the lead 8-0 with about 10 minutes left in the first quarter.

The Marauders then went  on a six play drive, which ended in a field goal by kicker Jacob Scott. This made  the score 11-0 with about five minutes left in the first.

Irving didn’t get another first down for the rest of the quarter.

The Marauders went on an eight play drive, which ended with Edwards scoring his second touchdown of the night,  making the score 18-0 to end the first.

Irving punted the ball to start the second quarter and the Marauders went on a three play drive. Edwards found the endzone for the third time, increasing the Marauders’ lead to  25-0 with about 11 minutes to go in the second.

Irving didn’t another first down for the rest of the second.

The Marauders ended up going on a seven play drive in which Ethan Barr found the endzone, making the score 32-0 with about seven minutes left in the second.

After another punt by Irving, the Marauders  went on an eight play drive. Nussmeier found junior wide receiver J. Michael Sturdivant for an 11 yard touchdown, making the score 39-0 to end the first half.

The Marauders got the ball to start the second half. Edwards went on a one play 69 yards to the house to make the score 46-0 with about 11 minutes left in the third quarter.

Irving then went on a six play drive, but fumbled the ball. Sophomore defensive lineman Bryson Barber brought the ball back for 80 yards, making the score 53-0 with about nine minutes left in the third.

Irving went on a four play drive, which ended in a blocked punt recovered by the Marauders. However, #8 on defense for the Tigers intercepted it. Irving fumbled the ball later on in the drive and neither  team scored for the rest of the third.

Both teams punted to start the fourth quarter.  With about two minutes left in the game, senior running back Jack Saunders scored a touchdown,  making the score 60-0 and ending the game with a Marauder win.

Their next matchup is on Thursday, Oct. 3 at 7 p.m.. The game will be on the road against Irving Nimitz.

“We just have to go 1-0 each week,” Coach Kevin Atkinson said.

Battle of Unbeatens: Lone Star vs The Colony | Week 8 Movie