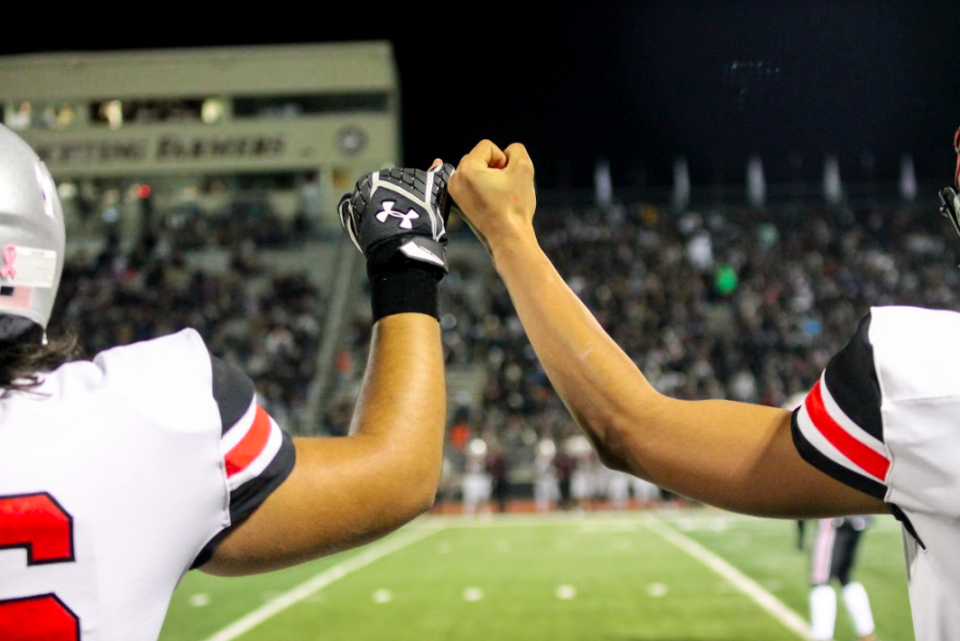 Marauders brought the axe back home after their 48-42 overtime victory against one of their biggest rivals, the Lewisville Farmers.The team is officially the undefeated 6-6A District Champion and  secured home-field advantage for the first round of the playoffs against Keller Central.

Everytime the Marauders would score, Lewisville wouldn’t give up and scored as well. The first half was big for both teams as there were only two punts by halftime. At halftime the Marauders were in the lead 27-23 and junior quarterback Garrett Nussmeier had thrown three touchdowns – one to sophomore wide receiver Dallas Dudley, one to senior wide receiver Jaden Robinson and one to senior tight end Collin Sutherland. Senior running back Ty’son Edwards scored once in the endzone as well.

“We knew we would come out fast to start the half so it was very good,” Dudley said.The

In the second half, the team struggled on ball security but kept fighting. Both Edwards and junior linebacker Tyler Gainey fumbled the ball once. Edwards fumbled at the one yard line, but senior linebacker Ethan Barr sacked the Lewisville quarterback in the endzone to give the Marauders two points.This safety put the Marauders in the lead 39-36 with around nine minutes to go in the fourth quarter.

However, a turnover by Gainey and a ten play drive by the Farmers  allowed Lewisville to take the lead 42-39 with 4:59 left in the fourth. With less than a minute left on the clock, sophomore kicker John Wegendt made a 24 yard field goal to tie the game 42-42, bringing the game into overtime.

Lewisville started with the ball but went four and out.

The Marauders just needed a field goal to win the game. However, on a third and eight Nussmeier scrambled to his right and found Dudley for a walkoff 23 yard  touchdown to make the final 48-42, securing the Marauders the victory and the axe.

“I knew I had to keep playing my game and doing what I need to do for the team,” Dudley said.

The second the horn blew the whole team raced onto the field in celebration.The Marauders are enjoying the win and getting prepared for their first playoff game against Keller Central, which will be at home on Nov. 15th at 7 p.m.