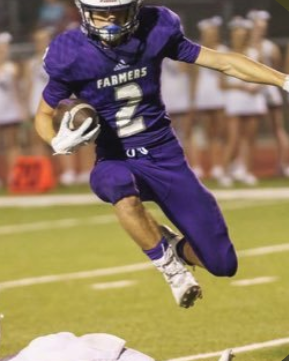 Farmersville started off their 2020 with an embarrassing 70-20 loss to Rains. They bounced back with a much more competitive battle against Krum and in a 33-31 effort got their first win of the season.

The reason for that win? Star running back Braden Lair.

“First I have to give all credit to my linemen and quarterback,” Lair said. “Our linemen blocked their hearts out and it showed when the line parted like the red sea. Our quarterback Ej Chairez showed out tonight (215 total yards) and lead us well. But overall it was amazing feeling finally coming out and executing like I know how to!”

Lair had an astonishing day in Farmersville’s first win of the season. On just 20 carries he ran the ball for 224 yards and two touchdowns, he also had three receptions for 69 yards and another touchdown. All in all, Lair had 23 touches for 293 yards and three touchdowns in the victory.

Farmersville with Lair’s amazing performance gets their first win of the season. They now sit at .500 with a record of 1-1.

“It was a great feeling getting our first win. We aren’t 100% satisfied with the game since we left a lot of points on the board but you have to do whatever it takes to win,” Lair said.

Farmersville this year was predicted by many to miss the playoffs as last year they went 2-9. Despite making the playoffs they were shutout in round one 57-0 by Gilmer. Lair last season ran for 630 yards, six touchdowns, and even had 46 tackles.

Lair has shown in two games already that people shouldn’t be sleeping on Farmersville much longer.

“You can expect a lot more confident team. We came into our game first game in a new offensive system and a lot of young players in positions and a lot of doubt. But this game we finally started trusting each other and bought into the offense and had an explosion from many different players,” Lair said on what can be expected from his team the rest of the season.

Lair and Farmersville now will take on the 1-2 Ferris Yellowjackets. Ferris is coming off of a 32-16 loss against Ford. Farmersville is coming in with a lot of momentum, now that Lair and the offense are feeling confident, watch out.

“Things people should know about me is that I’m a very serious competitor and want to win no matter what it is. If I’m playing ping pong I’m not going to mess around and take it very seriously. Anyone that’s been around me on a Friday night knows I’m very intense about what I do. But overall I’m just playing hard so my son can be proud of his dad one day!” Lair said.

The Players Behind the Best Football Team in Plano, John Paul II