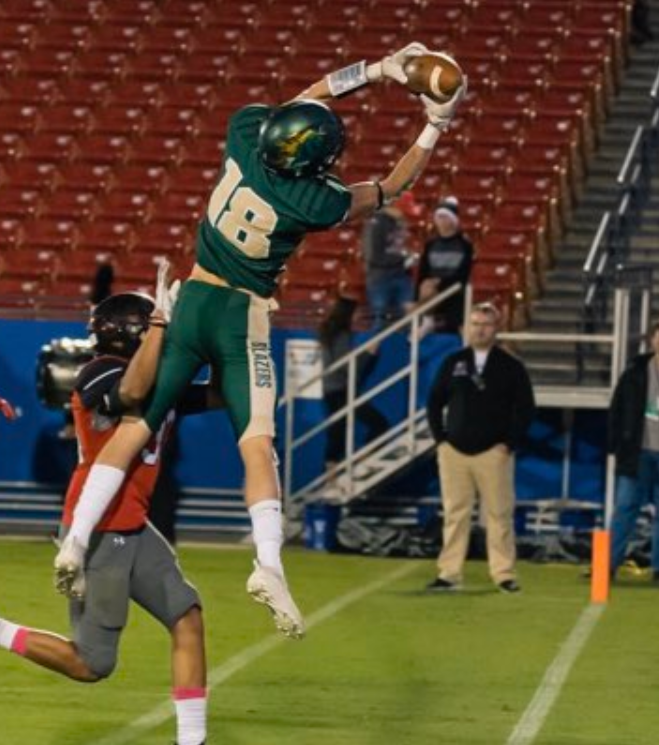 Lebanon Trail first opened its doors in August of 2016. It’s one of the newest high schools in the Frisco Independent School District to help combat the ever-increasing population of Frisco.

Lebanon Trail is still trying to find its footing as a football program. Yet, it seems they already have a star player in wide receiver and lightning-quick Drew Donley.

Donley is a three-star wide receiver via 247Sports. He’s listed as the 169th top wide receiver and the 187th best player in the state of Texas for 2021. As a junior, he hauled in 45 passes for 641 yards and eight touchdowns. All of which were team highs.

“What I think leads to my success is hard work and humbleness. Also staying close to God and staying faithful,” Donley said. “Being able to work hard while no one is watching and being ok with not being congratulated for it.”

Donley has picked up some steam on the recruiting trail recently as he just received an offer from Ole Miss, his first from an SEC program. Donley put it simply…

Donley has in total received 25 offers from programs such as the aforementioned Ole Miss, Northwestern, Boise State, Hawaii, and others.

Lebanon Trail’s district remains largely unchanged with the realignment. They still have to go through Frisco, Denison, Lovejoy, and now first-year program Rock Hill in District 7 of 5A D2. Donley though has high expectations for his squad.

“For Lebanon Trail, I want to have a winning season. I am a part of the second graduating class and my senior year I want to make it to at least one round of the playoffs,” Donley said.

One program to potentially look out for Drew Donley is Ohio State. Drew’s father, Doug, played for the Buckeyes from 1977-1980. He averaged well over 20 yards a reception due to his lightning-quick speed. That has absolutely been passed down to Drew as well. He’s been timed in the 40-yard dash as low as 4.37 and holds a personal record of 10.53 in the 100-meter dash.

Doug Donley finished his career as a Buckeye with 106 catches for 2,252 yards and 16 touchdowns. He would end up being drafted in the second round by the Dallas Cowboys. Due to injuries, however, he was forced into early retirement.

Drew has been doing his best to stay in shape during this quarantine.

“During quarantine, I’ve been able to still run routes with my quarterback because he lives right next to me. My personal trainer also let me come work out at his place and he trained me so I was able to get all my work in,” Donley said.

If there was ever a team to watch out for in 2020 it could be Lebanon Trail. Drew Donley is going into his senior year as hungry as ever and wants to end his high school career with a bang. If anyone can bring them to the playoffs, it’s Drew Donley, one of the states’ most impressive wide receivers.

“Fans should know that I am the hardest worker on the field,” Donley said.