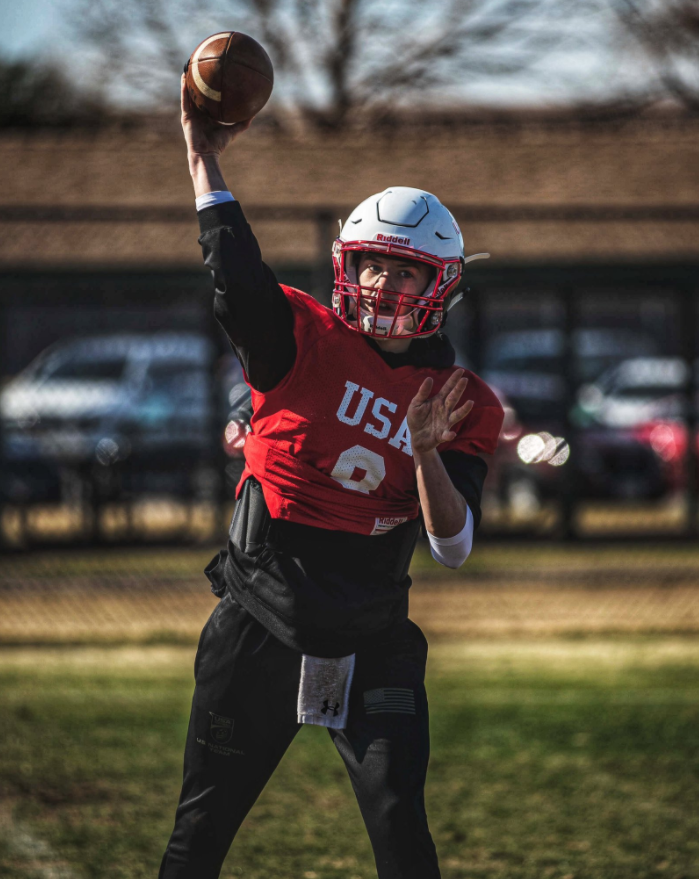 They started off 0-4, losing all non-district games. They weren’t bad, most of the games were competitive they were just on the wrong end of the scoreboard for the first four weeks. These debacles included a 68-65 shootout loss to Mckinney North.

After that? 6-0, going undefeated in district play, thus winning the district at 6-4. Once in the 5A D2 playoffs though, and they stumbled to Randall losing 24-17. It was a wild rollercoaster-like season for Northwest.

Now, Northwest makes the move to 5A D1 in a completely different district. Senior quarterback Austin Ahmad and his 27 total touchdowns are gone as well. The potential answer? Jake Strong.

Strong was a freshman last season for Northwest, yet got some reps as the varsity quarterback. Even connecting on a touchdown pass in Northwest’s 49-14 win over Poly.

“It was an amazing experience that I won’t forget. The band playing, and the student section made a phenomenal atmosphere. It was really cool to be apart of,” Strong said on his varsity experience. “NISD Stadium, which used to be named Texan Stadium, was the place where I started playing football, so being able to play in the exact same stadium as I did growing up is a dream come true for sure.”

Strong in middle school, played quarterback for the USA National Team. During his time there, he was a three-time captain.

“My work ethic, discipline, and dedication to the game are directly what leads to my success,” Strong explained. “However, God, the support from my family, coaches, friends, and teammates are a huge part as well.”

Strong’s impressive resume already, has gotten the attention of NCAA programs. Recently, he received his first offer, one from Illinois State.

“Receiving the offer from Illinois State as a freshman was a true blessing and I’m very grateful to have that opportunity,” Strong said. “For me, it’s validation that if you keep your head down, control the controllable’s, and work hard, everything else will take care of itself.  My main priority is my team.”

Northwest has a lot of pressure going into 2020. They make the jump to 5A D1 and are in a new district full of teams that weren’t there last year. Teams like Abilene Cooper, Arlington Heights, Azle, Brewer, Crowley, Grandbury, Saginaw. Including Northwest, that makes it six teams in this new district who made the playoffs a season ago.

“You should expect big things from the Texans this year,” he said. “We’re not ones who talk much, we’ll let our play on the field speak for itself.”

Jake Strong has three more years at Northwest and has already done plenty to put his name on the map. Now with Northwest in 5A D1, expect to hear a lot more out of them and Strong.

“I will be the hardest working guy you know. From the field to the classroom I won’t fail. When you talk about football powerhouses, I want to bring Northwest into that conversation. I’m a team-first guy. It’s all about we over me.”