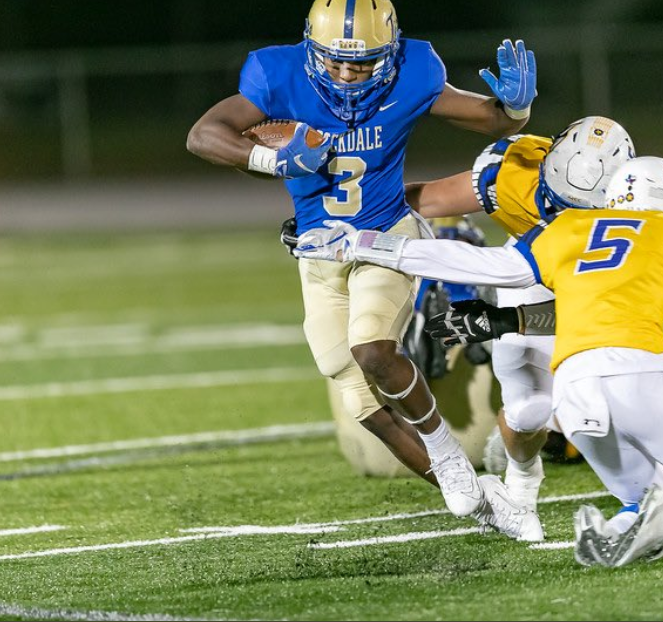 Rockdale is one of the best programs in Texas 3A football. In 2017 they finished a 13-3 season that saw them as champions at the end of it. The past two years though, a combined 15-7 record with two opening-round losses in the playoffs.

Rockdale is trying to get back to its championship-winning days. Good thing they have one of the best running backs in the state of Texas on their side. Meet Cam’Ron Valdez.

Valdez is a four-star 5’10 190-pound runningback from Rockdale. Via the 247Sports Composite, he’s ranked as the 17th best running back in the 2021 class and thus the 50th ranked player in the state of Texas overall.

“My success comes from hard work and the determination of being the first in my family to graduate college. As well as doing it for my mother,” Valdez said.

Valdez has been an absolute machine for Rockdale as of late. He’s been the man in the backfield for the past two seasons and has video-game-like numbers to show for it. As a sophomore, he was named as the district 10-3A-1 offensive newcomer of the year. He ran for 1,175 yards and 17 touchdowns on just under seven yards a carry.

As a junior, he got even scarier. On over nine yards a carry, he ran for 1,697 yards and 26 touchdowns in the same amount of games an almost the same amount of carries as the year prior. This led to him being named the offensive MVP for his district.

“It’s a great feeling being recognized by the teams and coaches I play against. I want to be the best in everything I do so I will be coming for overall MVP,” Valdez said.

Rockdale finished third in the district last year going 4-2 in district play and 8-2 overall. In the first round of the playoffs, they fell to eventual state champion, Grandview, 42-7. The year prior, the same result, except one less win in the regular season and this time a 45-21 loss the eventual champions Grandview.

In 2020, Valdez looks to do even more to put Rockdale over the Grandview hump.

“Expect something big from us this season. We only have one goal this year and that’s a state title,” Valdez said.

Valdez is one of the best running backs in Texas. Thus, he’s received 24 offers in total. Arkansas, Michigan, Nebraska, Oklahoma State, and Texas Tech among others have thrown an offer Valdez’s way.

“The recruiting process has been treating me and my family well. The relationships and the knowledge I have gained are a blessing,” Valdez explained.

“The people should know I am a fighter for what I believe in, and I believe if you want something you have to turn that want into a reality,” Valdez explained.