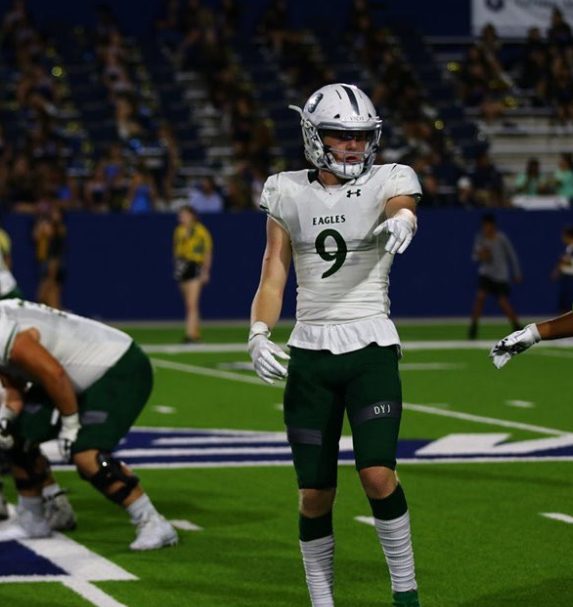 In 2019, Prosper opened it’s doors to the Children’s Health Stadium. A $48 million venture that can seat 12,000 screaming fans.

The news came as no surprise as Prosper is one of the fastest-growing cities in North Texas. Since then, Prosper has built a second high school in its district, Rock Hill.

What might have been surprising though was just how amazing the Prosper Eagles were inside their new stadium. Prosper, home of the 2008 football state champions, won 11 games in 2019. They also reached the 6A D1 quarterfinals where they lost a heartbreaker to Rockwall.

Prosper finished the season 11-3 whilst putting up 37 points a game and only allowing 19. One of their best offensive weapons, tight end Cameron Harpole, just announced his decision to commit to San Diego State University.

“San Diego it’s just an amazing place filled with an amazing coaching staff that I have created a relationship with. I’m happy to be apart of Aztec Nation,” Harpole explained.

Harpole is a three-star commit via the 247Sports Composite. He’s ranked as the 85th best tight end for the 2021 class and thus the 243rd ranked player in the state of Texas. He received 17 offers including ones from Virginia, Yale, and Air Force but ultimately, sides with the Aztecs.

As a junior, Harpole caught 35 passes for 468 yards and four touchdowns for the soaring Prosper Eagles.

“I credit all of my success towards my parents. They have raised me to be the best possible son and I give all of my credit to success to them without them none of this would be possible,” Harpole explained.

Harpole literally played under the brightest lights last season as theirs not many stadiums bigger and better than Prospers.

“The new stadium is awesome, the atmosphere of playing there is like no other, and nothing gets better than Friday night lights,” Harpole said.

Cameron Harpole and the Prosper Eagles rejoiced in 2019. They had their most wins in a season in ten years, reached the quarterfinals of the state playoffs and in a shootout, almost pulled off the win. Prosper in 2021 is now realigned in a new district with four other playoff teams from last season. Allen, Braswell, Guyer and Mckinney, Mckinney Boyd, and Little Elm aren’t scrubs either though.

Harpole though is as determined as ever to have an incredible season in 2020.

“Our 2020 season goal is to be the best possible team we can be. I think with the returning players we are getting back and some new add ons we will be on fire this year!” Harpole exclaimed.

Harpole becomes the seventh commit to the Aztecs 2021 class, all of which have come in the past couple of months. Harpole’s commitment has bumped up San Diego State to the third-best recruiting class in the Mountain West via 247Sports.

Harpole has one more year at Prosper, then can’t wait to make some plays for the Aztecs.

“If there are any fans out there for me, I want to thank you for always having my side and always being supportive to the Prosper football family and me,” Harpole said.