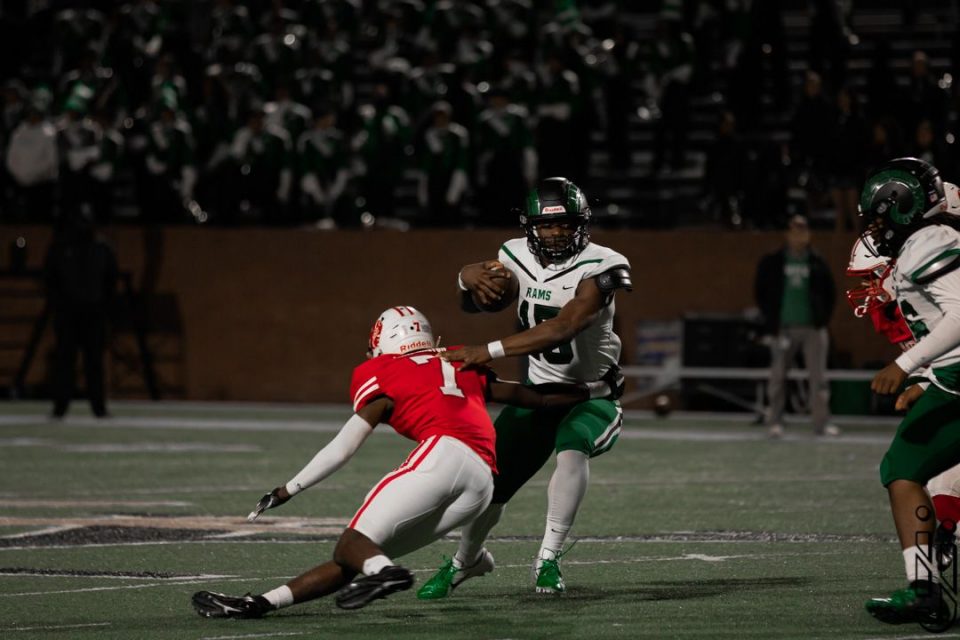 Mayde Creek has been open for 35 years. Despite that, the Rams have only made the state playoffs nine times. This past season was their first time making it to the big dance since 2008.

The Rams were in a brutal district with Katy, Tompkins and Katy Taylor. Regardless, Mayde Creek still ended up going 4-2 in district play, made it to the 6A D2 area round, and finished a very impressive 9-3.

One huge reason for that success, and for the potential continued success in 2020, is district offensive MVP, Julius Loughridge.

Loughridge is the Rams’ running back. Last year was his first as a Ram as he transferred from district rival Katy Taylor after his sophomore season. As a junior, Loughridge ran the ball 215 times for 1,588 yards and 15 touchdowns.

“My personal success comes from my faith and my supportive family,” Loughridge said.

Loughridge transferred after his sophomore season at Katy Taylor in which he had 553 rushing yards and 5 touchdowns on 115 carries. One year later, his new team, beats Katy Taylor 14-10 and he wins district offensive MVP.

“It was a dream come true knowing my hard work helped me accomplish a goal I had set for myself at the beginning of the season,” Loughridge said.

Loughridge after his sensational year is currently a three-star recruit via 247Sports. He’s listed as the 107th running back in the 2021 class and the 234th ranked player in the state of Texas. Loughridge through his hard work has accumulated 10 offers from the likes of North Texas, Nevada, Army, Navy, and Colorado State among others.

“It’s relieving knowing my parents won’t have to pay for college,” Loughridge said.

Loughridge has his goals set for even more in 2020. Even though they remain in the same district as powerhouse Katy, Loughridge expects nothing less than excellence from his squad.

“Mayde Creeks’ goal this year is to go undefeated in district play. Lead the district in offensive and defensive stats, make an even deeper playoff run than last year. Get as many kids to get scholarships and play at the next level as possible,” Loughridge said.

Mayde Creek and its coaching staff have been keeping their athletes in shape during quarantine with scheduled zoom workouts.

“As a team, we’d have zoom workouts Monday through Thursday. I’d go meet up with a  personal trainer on Wednesdays and Fridays with a couple of teammates. I would also work out in my garage, run around my neighborhood, or go play basketball with some friends,” Loughridge said.

Julius Loughridge is simply put, one of the best running backs in the state of Texas. Yet, he’s one of the most underappreciated in the state as well. Expect Loughridge to put his team on his back and have another outstanding season. Power-five conferences, take notice of this guy.