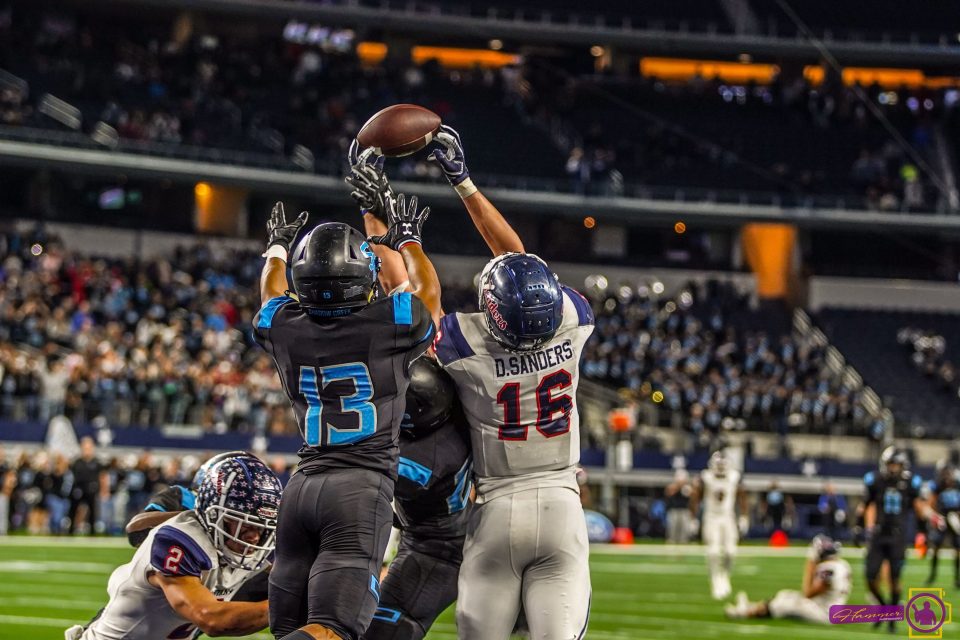 Shadow Creek is an anomaly. Most programs, regardless of sport, struggle in their first season. Shadow Creek’s first season? 15-1, making it all the way to the 5A D1 state title game before losing to powerhouse Highland Park. Their second season? Even better. A 16-0 perfect season resulting in the school’s first state championship.

Shadow Creek returns much of its core as well. Quarterback and Baylor commit Kyron Drones, returns for his senior season. Three-star wide receiver, Carlton Guidry, who had over 600 receiving yards with nine touchdowns returns. Terrence Cooks, second-leading tackler, and Jaylen Lane who had a team-high five interceptions all return.

Shadow Creek though, gets two more years out of one of the most underrated weapons in all of Texas football. Soon to be junior, wide receiver, Randy Masters.

Masters already reached the apex of football in his sophomore year by winning a state title for his school.

“Winning state was a dream come true. I’ve always wanted to do that, it even felt better knowing all the hard work you put in,” Masters said.

Masters is already a four-star prospect via 247Sports. He’s ranked as the 24th best player in Texas for the 2022 class. As a sophomore Masters hauled in 20 receptions for 356 yards and five touchdowns. Universities and scouts all over are starting to realize Masters’ potential and talent as he has received 16 offers to date from the likes of LSU, Florida, TCU, Oregon, Baylor, and Auburn among others.

“Dream come true, especially coming from where I come from. I never had anything so I enjoy each and every last one of them to the fullest,” Masters said on receiving all his offers.

Masters most notably scores arguably the most important touchdown of the game against Denton Ryan. A botched snap led to the Ryan punter just trying to get rid of it. Masters, picked it up and took it to the house which ended up being the deciding touchdown. Masters credits all his success to one thing though, family.

“Family, my pops who passed, dedicating myself and working hard to take care of my people and enjoy doing what I love.”

Shadow Creek has an impressive 31-1 record in its first two years as a program with one state title to their names. Masters believes the Sharks can continue that success this season.

“Winning the state title back to back,” Masters said on his teams goal for next year.

Shadow Creek has been dominant in 5A D1 play, but in 2020 they make the jump to 6A. They will be in district 23 with Alief Elsik, Alief Hastings, Alief Taylor, Alvin, Strake Jesuit, Pearland, and Pearland Dawson.

Masters has shown already that he’s a star. He has the potential to shine even brighter in his junior season. If there was ever a kid to watch out for, it’s Randy Masters.

“I’m coming for everything they say I couldn’t have and they haven’t seen anything yet,” Masters said.

Tomball Memorial the next test for Bridgeland Bears | Week 7 Preview