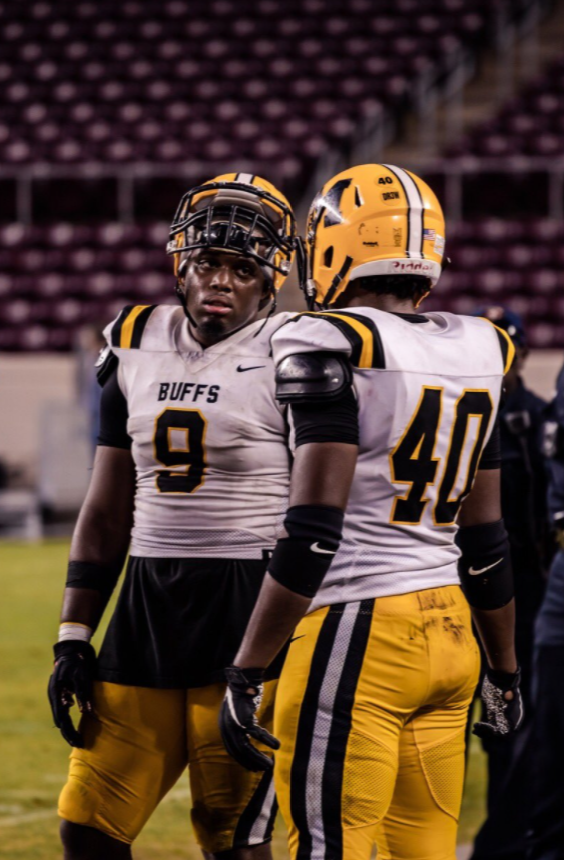 Fort Bend Marshall has gone a ridiculous 29-3 over the past two seasons. Unfortunately, despite this dominant play they’re yet to win a state title over these two seasons. Both times they made it to the 5A D2 title game against Aledo.

Nonetheless, the Buffalos are one of the most impressive teams in the state of Texas. One of their defensive stars just ended his recruitment. Defensive end, Tristin Drones-Mouton, announced his commitment to Houston Baptist University.

“What made me commit is that I’m at home and that these coaches make me feel like family,” Drones-Mouton said.

The 6’1 251-pound edge rusher had a phenomenal year for Fort Bend Marshall as a junior. EN route to a state runner-up finish in 5A D2, he had 76 tackles and nine sacks with three fumble recoveries.

“What leads me to my success is I’m a hard worker, no stopping me,” the Houston Baptist commit said.

Fort Bend Marshall in 2020 are only returning about half their starters. Still, they’re expected to make a run with their defense. Drones-Mouton is joined by Rice commit linebacker Kenny Seymour as well as defensive back Christian Jackson. If Marshall does make a run, it’ll be because of its elite defense.

“My goal is to go back to state for the third time,” Drones-Mouton said.

If Fort Bend Marshall wants to win a state title, they have to go all-in in 2020. If anyone can be that anchor to lead them to championship glory it’s Tristin Drones-Mouton.

“What I want fans to know about me is that I’m hungry,” Drones-Mouton said.