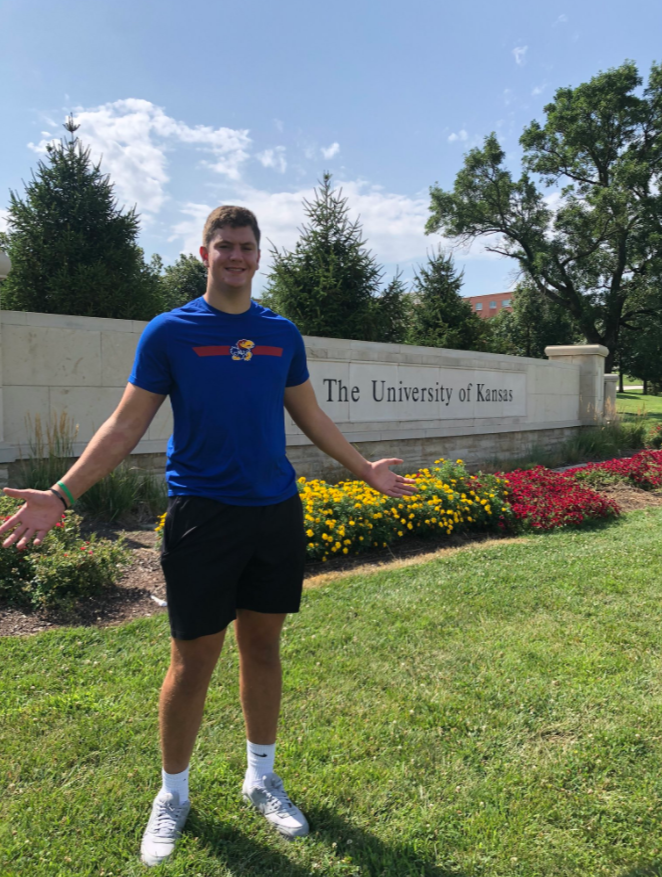 Shortly after D’Juan Grant announced his commitment to ULM, it was followed by another commitment. This time it was Ganado’s offensive tackle, Larson Workman, announcing he was going to Kansas.

“One of the main reasons I committed to Kansas was the movement of the team. With a new coaching staff and Les miles at Kansas, it is moving in the right direction and I want to be a part of something special. I have a really good relationship with coach Meadows (offensive line coach) and I feel as he can provide me what I need to be successful,” Workman said.

Workman had other offers from Arkansas State, Eastern Michigan, Incarnate Word, and South Dakota among others but ultimately went with his lone power-five offer and Kansas.

Larson Workman is a 6’5 270-pound monster who’s gained around thirty pounds since March. Workman was an all-district selection last year as a junior.

“Hard work is the only answer. In eighth grade, I told my dad I wanted to play college football and he told me ‘someone has to do it why can’t it be you.’ I put in so much work to try and get better and it eventually paid off,” the future Jayhawk said. “This past season was my first year playing offensive line and I loved it. I was nowhere close to being a natural at it but I put in work to be able to play right tackle. I also have put on 30 pounds since the basketball season which ended in March. I was on a 5000 calorie diet to try and put on healthy weight and continue to get bigger.”

Workman literally lives by his name.

The star tackle plays for Ganado who had an impressive season in 3A D2 last year finishing 10-4 and making it to the state quarterfinals against East Bernard.

The Ganado Indians in 2020 fall to 2A D1 where they will be in a district with Flatonia, Schulenburg, Shiner, and Weimar.

Workman believes they can make a run in 2A D1.

“My goal for the Indians this year is to win a state championship,” he said. “We have been working very hard for many years and I can’t wait to play with my brothers my senior year of football. I am ready to prove people wrong just as we did last year and continue to leave a legacy at Ganado.”

The UIL, despite other states pushing football back to spring such as California, recently announced that Football will happen for Texas this fall.

Workman becomes the 14th hard commit for the Kansas class of 2021. They rank 53rd nationally via 247Sports and seventh in the Big-12. He’s the third offensive lineman for that class and one of five Texans.

“The fans should know that I am loyal and eager. I am going to do everything in my power to be a great athlete and person to represent the Jayhawks. I am ready to get to work and be the best version of myself!” Workman emphatically said.