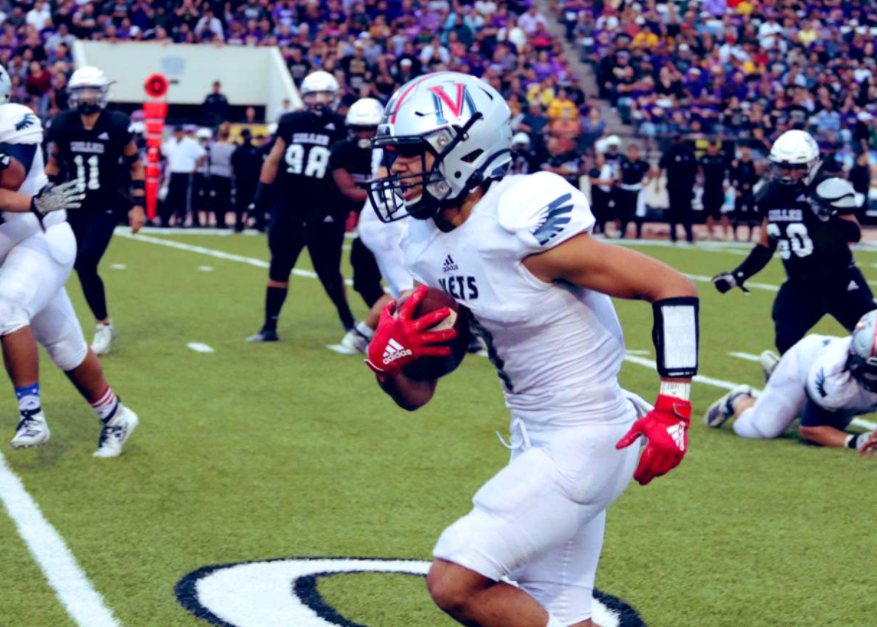 Corpus Christi Veterans Memorial is the youngest program in all of the CCISD. Yet, they’ve found success when it comes to football rather quickly and has gotten better every single season.

“We have worked our whole high school career for this moment and trusted the process,” wide receiver Cameron De La Pena said. “Our whole team has played together and done our role and played unselfishly. Our team chemistry is something that has played a big part in our success this season.”

“The unselfishness of everyone on our team is the biggest factor to our success leading up to this point and moving forward,” quarterback Carter Senterfitt added.

CCVM is now a ludicrous 46-7 over their last four years. They’ve slowly risen to the cream of the crop for Texas football.

Two players who have directly contributed to that success are the quarterback-wide receiver tandem of Carter Senterfitt and Cameron De La Pena.

Senterfitt, simply puy is one of the most underrated prospects in all of Texas.

The 2021 quarterback in 13 games this season has completed 64% of his passes for 2,629 yards with 25 touchdowns and just five interceptions. He’s also added 944 yards and another 23 touchdowns on the ground. Total that up and that equals 3,573 total yards with 48 total touchdowns in just 13 games this year.

“The playmaking ability of the receivers and the offensive line has been a large portion of my personal success,” Senterfitt said. “Many don’t see, but when your defense is constantly giving you opportunities and guys are making plays on special teams, it makes scoring dramatically easier.”

Senterfitt’s top target is junior wide-out De La Pena. This season, he’s racked up 65 receptions for 1,106 yards with 14 touchdowns. He’s added another three touchdowns on the ground as well.

“I have worked hard to get to where I am and have had great teammates and coaches that trust me with the ball. I’ve had a great quarterback that can put me in the right position to make plays all season,” De La Pena said on his success.

The 2020 CCVM football team is easily, without question, the greatest team in school history. They aren’t looking to be the best in their history though. They want to be the best team in Texas this season and take home the 5A D1 state championship.

In the state semifinals, they will match up against fellow undefeated program, Cedar Park. The winner of that game will play either Denton Ryan or Mansfield Summit in the state championship game.

De La Pena and Senterfitt believe this team can go the distance and can compete against anyone.

“It will take getting better as a team each day now to win it all,” Senterfitt added.

Whenever the final whistle does blow on CCVM’s season, De Le Pena and Senterfitt will go down as Corpus Christi football legends. Adding that coveted state title to their resumes would be the cherry on top.

“Winning a state title is something every kid dreams about and it would be a great accomplishment for all of us. We have worked so hard to get here and we just have to finish it,” De La Pena said.

“Winning a state title has always been my goal, the coaches’ goal, and my teammates’ goal, so it would be everything. A very small percentage of people can ever say they won the big in one of the most competitive places to play football,” Senterfitt added.

Regardless of the outcome, expect De La Pena and Senterfitt to do what they’ve done all season, ball out till the final whistle sounds.