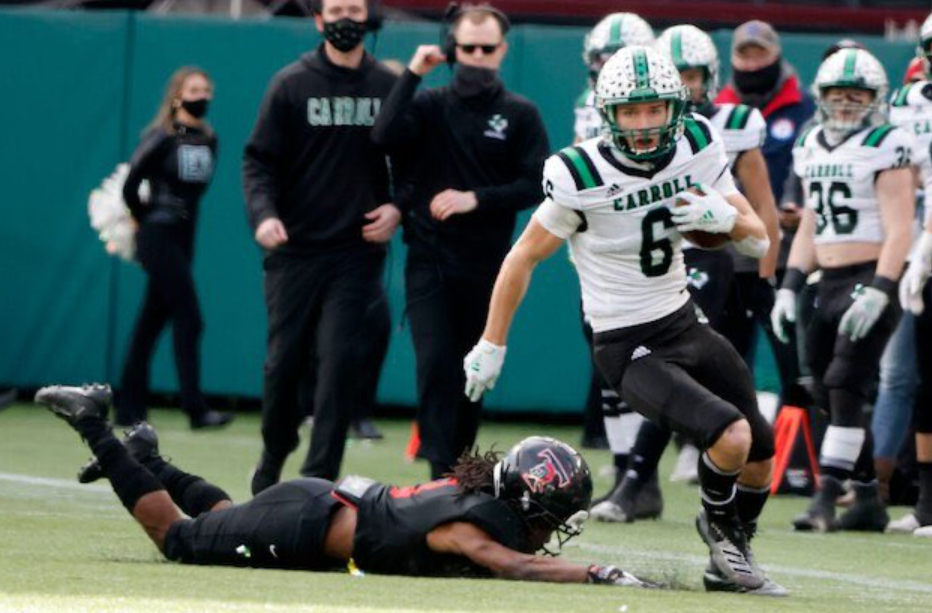 Southlake Carroll is one of the most storied programs in all of Texas football.

They have an all-time record of 464-138-8. That’s a winning percentage of 76%. Carroll to go with this, have eight state championships to their name. However, their latest was almost a decade ago way back in 2011.

In 2018, they reached the state quarterfinals in 6A D1 but fell to Duncanville 51-7. Last season, with sophomore sensation Quinn Ewers, they got back to the same point yet fell to the same Duncanville team 49-35.

This season, they meet again. This time, in the state semifinals. Ewers, now a junior and the top-ranked high school player in the country looks to unearth Duncanville from their DFW throne.

Ewers though can’t do it all himself. With him, he has arguably one of the best running backs and best wide receivers in the state by his side in Owen Allen and Landon Samson respectively.

“Playing with Quinn is amazing, I’ve known him since 6th grade. We use to run the same plays when we were younger, so the timing and connection have been there our whole lives. He’s special though whether it’s throwing the ball with his off-hand or putting it in between defenders 40 yards downfield it’s definitely amazing having that talent back there,” Samson said.

“It’s an honor to be in the backfield every play with Quinn. It’s very obvious the role he plays in the passing game. But what many people don’t see is how crucial Quinn is to the run game. Quinn is a rare talent, and when teams spread their 11 players to cover our passing game, our run game is highly effective,” Allen added.

Carroll this season enters the state semifinals with an 11-1 record. Ewers has only played six games meaning Allen, Samson, and the supporting cast had to step up this year. Those guys have responded emphatically as they’ve taken the ball and ran with it.

Carroll is averaging nearly 48 points per game this season with their only loss coming at the hands of Rockwall 44-42 who finished 10-2 this season. Carroll like most every year has one of the more explosive offenses in the state.

“Everyone on our team has been putting in countless hours of practice and film. As a team, we understand we might not be the most athletic team in the state, but we definitely will prepare better than everyone else. Also, our coaching staff is definitely one of the best in the state. They spend more time with us than they did with their family so that we have a good game plan for the week,” Samson elaborated.

“I think our success is a direct representation of how dedicated our Coaches and players are. From the countless hours in film and in the field house to the relationships formed this season, I don’t think you’d find this kind of team pride anywhere else,” Allen added.

Samson, a junior, is the top receiving target for the Dragons this season. Samson has played in all 12 games and has hauled in 65 receptions for 1,114 yards and 14 touchdowns this season. He’s accounted for 33% of the passing offense for Carroll this season.

With three-star Minnesota commit Brady Boyd missing some time this year as well, Samson needed to step up and be the WR1 for Carroll. He’s passed that test with flying colors.

“Hitting 1,000 yards was one of my big goals before the season, and I wouldn’t be able to reach that without our offensive-line giving our quarterbacks time. I also look up to Brady Boyd and so any chance I get I’m asking him questions on what I can do differently to win on a route or make a tough catch,” Samson explained.

Owen Allen on the other hand has parlayed his incredible freshman season with an even better sophomore campaign.

As a freshman, Allen ran for 1,266 yards on just under six yards a carry for 23 touchdowns. This season, on just 33 more carries he’s totaled 1,831 yards for 24 touchdowns on seven and a half yards a carry.

Allen has already reached 3,000 rushing yards in his career and he’s not even a junior.

“Knowing I would be returning as one of very few starters from last year’s team,” Allen said on what led to his success. “I knew that I needed to make a huge jump from last year to now, in playing ability and in leadership. That little bit of motivation is what pushed me through all of this off-season.”

In order for Carroll to reach their ninth state championship, they have to get over the Duncanville hump. Two years ago they were embarrassed, last year they came fairly close. In 2020 they look to turn the phrase “third time’s a charm” into reality.

“To win it all this year we just have to trust each other and believe we will do our job. We started a little rough this season after our loss to Rockwall, but we started to build the team chemistry more and we are starting to play better than the week before. So to win it all we just have to focus on our opponent of that week, and do our 1/11th every day,” Samson explained.

“Staying healthy will be key in winning state. But I think when we’re sticking to our assignments and our technique is perfect, with our coaches, I think we are a very dangerous team,” Allen added.

Carroll on Saturday is looking to add to their already storied legacy. A win over Duncanville would solidify this team as an all-time great Carroll team.

They have the quarterback, skill position players, offensive line, defense, and coaches. Now, they just need to get the job done. Allen and Samson have been preparing for this moment all year. Don’t expect them to shy away from the spotlight anytime soon.

“What I’d like people to know about me is I love my team and my teammates so I’ll always give it my all on the field to get the win,” Samson said.

“I love playing football and have since I was a little kid. I love being able to put on the pads and be a part of something greater than myself. But what makes it really special, is the love and support we receive from the town we play for,” Allen said.

Marcus looking to lock up the district