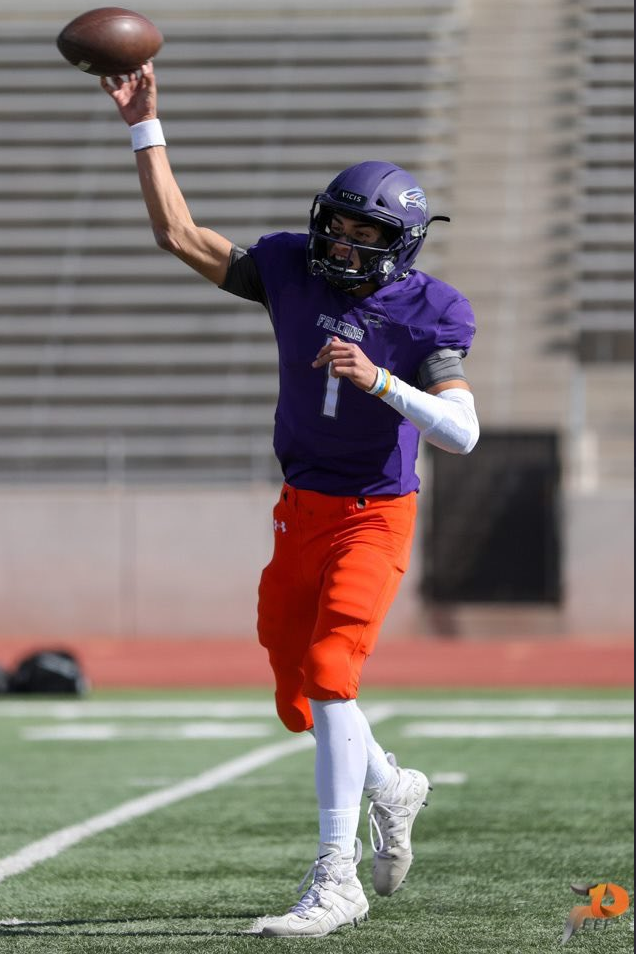 One of West Texas’ best quarterback prospects shut down his recruitment Friday night. Eastlake’s star quarterback, Orion Olivas, announced his intention to commit to stay in Texas and attend Houston Baptist University in 2021.

“It was all dependent on a lot of factors such as location, relationship with the coach, educational reasons, and the quarterback situation that ultimately decided for me when things were tight,” Olivas explained. “It’s a great school and I felt like a great fit for me as a player and as a young man, and I’m looking forward to being apart of it.”

Olivas had a breakout year with Eastlake in 2019. The district 1-5A-1 Co-MVP threw for 3,865 yards with 35 touchdowns in 11 games. He ran the ball for 425 yards and seven more touchdowns for the 6-5 Eastlake Falcons en route to a 5A D1 state playoff appearance and district championship.

Despite starting off the season 1-4, Olivas and company rattled off five consecutive wins in district play to get into the playoffs at 6-4. They fell to Monterey in bi-district play 66-42.

“It’s a combination of the will to work more than those around you as well as understanding what to work on to maximize my potential. Those ones called tryhards are the ones that make it big and change the world, my mentality has always been just that,” the 6’1 quarterback explained. “To be someone that has an effect on someone else’s world, and the only way I can do that is to be on top of my game and understand what it takes to be there. I always carry the mindset to be different from everyone, always have been.”

Olivas and the Eastlake Falcons make a huge jump in 2020 as they move up to 6A. They will be in a district with other El Paso schools like Americas, Coronado, Eastwood, Franklin, Montwood, Pebble Hills, and Socorro.

Olivas explains why Texas high school football means so much to him, and his town.

“Texas high school football means so much to me. There’s nothing like it anywhere because of its effect that it has on the football world. It brings joy and happiness to everyone every Friday when the lights are on and everyone is having a great time. It’s huge, and the best feeling any high school athlete can feel by far,” Olivas said.

Before Olivas takes over at Houston Baptist University, he has one more year at Eastlake. Olivas looks to show not only El Paso but all of Texas who he is.

“I won’t be one to call out specifically what I expect for us, but I definitely will say that we want to be as successful as possible by taking full advantage of every opportunity through these practices we’re given during these times. I have high standards and as a quarterback, I will never hesitate to compete with full confidence in my ability against anybody. Just watch what happens this year, it’s gonna be a wild ride,” Olivas said.

Houston Baptist University is getting one of the best Texas has to offer with Olivas. He is the first commit that Houston Baptist has for its 2021 class. No doubt though that Olivas’ commitment will lead the charge for others.

“Fans should know that I am stoked about the season and ready to put on for my team 100%. I’m good at what I do, and I’m confident that we’re going to do great things this year,” Olivas said.