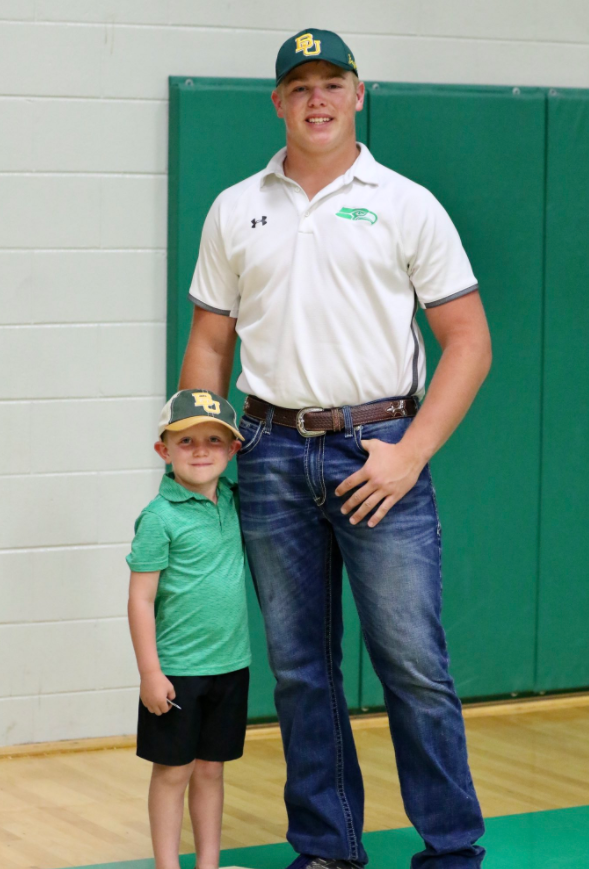 One of the biggest movers in 247Sports recent updates are Baylor commit, Tate Williams. On May 31st his rating on 247Sports was increased to 91, making him a four-star talent. It’s now all the way up to an impressive 93.

“If I’m being really honest with you I have no idea, the four-star commit said on why he’s been rising. “I don’t know how all these rankings systems work so to me it’s just a number. I view it as a bigger target on my back when I step out onto the field again. It’s more motivation to work harder.”

Tate Williams is a 6’4 offensive guard for Wall high school. Via 247Sports he’s the number 136 ranked player overall in the entire class of 2021. In terms of guards, he’s number 10 and overall the 22nd ranked player in the state of Texas.

Williams is a three-sport star for Wall specializing in football, basketball and Track, and Field. Tate is also the son of Ty Williams, former All-American shot putter for Angelo State.

“From seventh grade on, everyone always called me the try-hard. I always go full speed in anything I do whether it is lifting weights, footwork drills, or even scout team during football practice,” Williams said. “This mentality partially comes from the values my dad has taught me from his experiences. He has engrained this work harder than anyone, this never quit mentality in me. I always want to be the best and if I’m not I work until I am. I contribute most of my success to my Mom, Dad, and my coaches for pushing me to get the most out of everything I do.”

Williams had offers from Rutgers, TCU, and UNLV among others. But, at the beginning of May decided to make it official and become a Baylor Bear.

“Baylor has always been a dream school of mine so when I began talking to some of the coaches about possibly playing football for the Bears I was more than excited,” Williams said. “Getting to know the coaches and some of the players played a big part in my commitment as well. I felt like I was a part of the family and I’d never met any of these people. My gut told me this was the place I needed to be so I took that feeling and ran with it,”

Wall last season had a perfect regular season entering the playoffs at 10-0. However, they ended up falling to Pilot Point 26-7 in the third round of the 3A D1 playoffs.

Wall holds state titles in multiple sports, even winning their first baseball state championship in 2019. They have never won a state title in football. Wall’s district remains for the most part unchanged as they remain in 3A D1 in 2020.

“Our ultimate goal at Wall for 2020 is to make a run at a State Championship as it always is. There are several things we are going to have to overcome but nothing that can’t be acquired without a little hard work and dedication to each other,” Williams explained. “We are lining up to be pretty good this year but we’ve still got a long way to go until we are where we need to be to compete at the highest level.”

Baylor is now the 19th ranked recruiting class for 2021 in the country and thus number in the Big-12 only behind Texas. Via the 247Sports Composite Williams is Baylor’s highest-rated commit for the 2021 class. Other notable commits are Lindale running back Jordan Jenkins, DeSoto defensive tackle Byron Murphy II, and Shadow Creek quarterback Kyron Drones.

Williams is going to have a monster year for Wall in 2020. He won’t even be 18 until he reaches Baylor, the sky is the limit for this star.

“I’m just a farm kid that happened to be good at throwing people around on the football field. I enjoy playing the game but the memories you make with your teammates are what it’s all about,” Williams said. “If you’re ever in San Angelo around mid-July on a Saturday morning, stop by the farmers market and buy a watermelon or two from my sister and me you won’t regret it.”