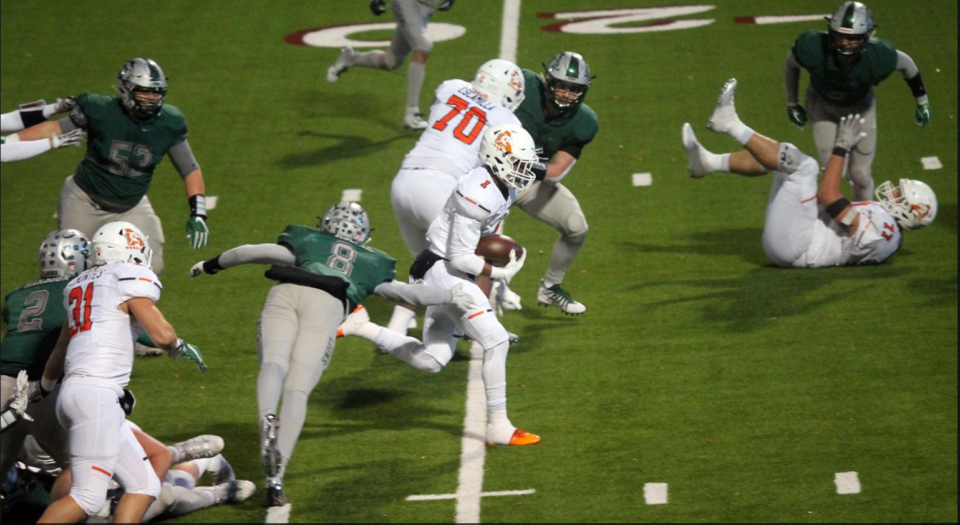 Just the name alone is enough to make some teams quiver. The high school has been one of the most dominant powerhouses in recent memory.

They hold eight state championships, tied for the most in Texas football history. They have seven in the past 10 seasons, another record. Since their second state championship in 2009, they have an astonishing record of 154-10.

Aledo since 2009 is winning 94% of its games. They have four perfect 16-0 seasons, and they haven’t lost more than two games in a single season during that span.

You could write on and on about how good Aledo has been over the past 10 years and how many records they hold. The 2019 regular season is almost in the books and the story on Aledo hasn’t changed one bit.

Aledo this season boasts an 8-1 record heading into week 11 of the football season. They’re only loss comes at the hands of 6A Guyer in the opening week 60-57. Since that, Aledo, just like usual has been on a warpath of destruction.

They’ve been averaging 53 points a game in their eight wins while only giving up less than 13. They’ve pitched three shutouts and have eclipsed 60 points in a game three times as well. Even putting up 77 on University in Waco.

No matter what side of the ball you look at, you’re bound to find future D1 athletes. Senior quarterback Jake Bishop is completing a ludicrous 78% of his passes for 2,443 yards with 29 touchdowns to just a single interception. Throughout his three year career at Aledo, he has nearly 7,000 yards to 83 touchdowns.

Wide receiver JoJo Earle, who has an offer from Arkansas, is already over 1,000 yards on 54 catches and 11 touchdowns. Along with running back Jase McClellan, who’s committed to Lincoln Riley and Oklahoma, The Bearcats are loaded with talent.

One of the more impressive athletes on the team though is a sophomore starting safety, Bryan Allen Jr.

Allen Jr. as a sophomore leads his team in tackles with 74, as well as interceptions and forced fumbles with two apiece.

Allen Jr. got started with football at a young age.

“My dad put me in football when I was 5 and I fell in love with the game.”

Allen Jr. has been starting on varsity since he was a freshman at Southwest High school in Fort Worth. Coming to Aledo for his Sophomore season he knew he had to keep his intense work ethic up if he wanted to succeed.

“The key is Hard work. Coming to Aledo I kinda already had a buzz, early offers and I started as a freshman on varsity at Southwest so coming into Aledo to a team with multiple D1 guys it was like I have to show these guys I can play and play at a high-level. Talk means nothing, I’m trying to get what a lot of these guys have and get to where most are going.”

Allen Jr. and the rest of the Bearcats defense have a simple mantra, and ever since the Guyer game they’ve lived by it.

“Simply stop what the other teams are good at, force turnovers, and give our offense short fields.”

Aledo has won seven titles in the last 10 seasons including a perfect 16-0 season last year. Allen Jr. expects the same thing from the 2019 Bearcats.

“The goal is to take it game by game and to win the state title.”

When you play for Aledo you better be ready. Perfection isn’t just appreciated, it’s required. Yet, the Bearcats are a family through and through.

“The culture is family and football. I transferred in after my freshman year from Southwest so I’m new to it but from the time I’ve been here it’s been exciting for me playing for a powerhouse. The expectations are high and I love it brings out the best in the team.”

With new players starting early like Bryan Allen Jr. among others, it’s easy to see how Aledo has kept up its dominant run for so long.

Anything but a State championship at this point is almost considered a failure for the Bearcat faithful.

One thing that will remain true for the foreseeable future, however, is the dominance of Bryan Allen Jr.

As just a Sophomore he will be leading this Bearcat defense for years to come so opposing quarterbacks better be ready.

“You can expect me to get better every year.”