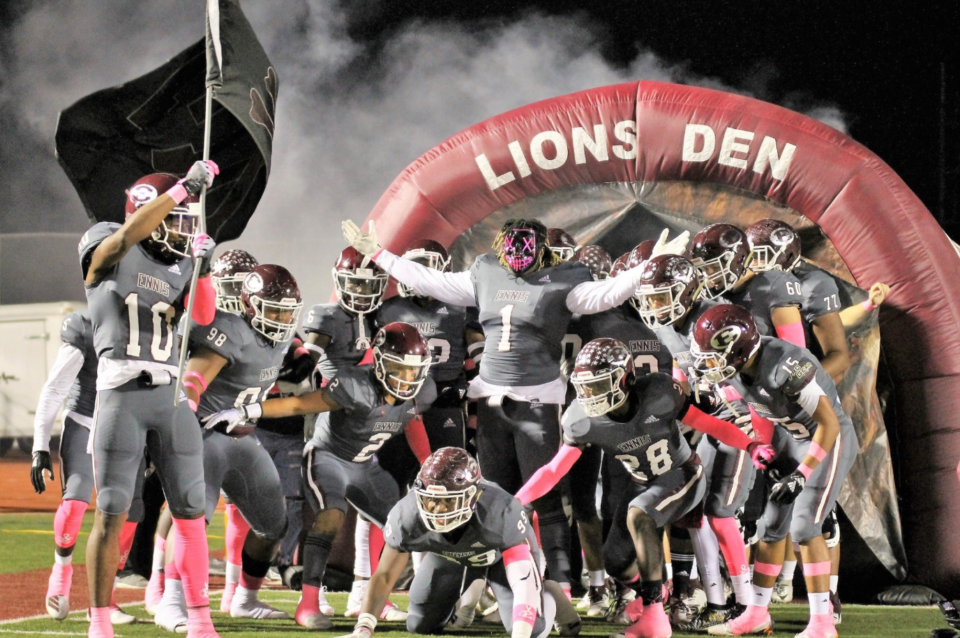 Ennis came into Frisco and shoutout the Raccoons 17-0 at The Star. Running back Jarius Jones referred to the Ennis faithful as – “the 12th man.” Being at the game you can clearly see why.

“The Ennis fans are our team’s backbone, they support us no matter what and make us feel at home at away games,” Jones added.

You wouldn’t know it based on location. But, Friday’s third round matchup in the 5A D2 playoffs between 11-1 Frisco and 11-1 Ennis at The Star, was an Ennis home game. The Star is located less than 10 minutes from Frisco High school, yet upon walking into the 12,000 seat venue you could tell all the Ennis faithful made the hour-plus long drive to support their team. The Ennis fans outnumbered the Frisco fans 2:1 and from the opening kickoff, it was easy to tell.

“The support that the Ennis fans have shown all season has been amazing,” quarterback Collin Drake said. “The amount of people and noise made the stadium a great atmosphere to play in, and we are very grateful for the city’s support.”

“The fans are very special they come out and support every game to be loud and keep us going no matter what,” wide receiver Laylon Spencer added.

Ennis High school is the home of the five-time state champions, the Ennis Lions. The last time the Lions have reached the regional final was in 2014 when they won it all. However, the next hurdle en route to number six is state powerhouse Aledo. The last time Ennis matched up against Aledo was in 2013 when the Bearcats flatlined them 29-6 on the path to a state championship of their own.

Ennis this season goes into the regional finals at 12-1 and have talent all over both sides of the field. On offense, junior quarterback Collin Drake leads the Lions’ charge as both the teams leading passer and rusher. Drake has 31 total touchdowns with over 2,200 passing yards with another 900 on the ground this season.

“There is no such thing as personal success,” Drake said. “We are all one unit and it takes all of us in order to be successful. I have a great offensive line that never gets enough credit for the work they do, and I have some great receivers that are dangerous with the ball in their hands.”

Runningbacks Devion Beasley, Jarius Jones, and Dyllan Santos serve as a top tier 1-2-3 punch when Drake doesn’t have the ball in his hands.

Jones who eclipsed the 500-yard mark against the Raccoons gives credit to “My lineman.”

“I give all credit to that O-line working in the trenches, they’re always the first to get blamed and last to get credit.”

The man who scored the first touchdown of the day for the Lions? Star wide receiver Laylon Spencer. – “It was a special moment because I came out last year and scored my first ever touchdown In the star so I wanted to come out and do my best to help my team take the dub.”

Spencer on the season has 66 catches for 1,300 yards and 12 touchdowns including his amazing catch in the corner of the endzone.

“I just want to come out every game and play my best to help my team out,” Spencer added.

After Ennis’ 2014 state championship Ennis went the next four seasons going a combined 26-18 and failing to reach double-digit wins in a season. The 2019 squad already has almost half the number of wins as the past four years combined.

“We just go out and have a good practice every day,” Spencer said. “Work hard and when it’s gameday just focus up and come out and play our best.”

“We have a great coaching staff that works really hard to put us in the best position to win, and we all want to play our hardest for each other,” Drake added. “The defense has played awesome the whole season, and their performances take a lot of pressure off of the offense.”

That Lions’ defense has already forced two shutouts these playoffs and are only letting up 13 points a game.

“Our defense plays lights out every game and it all starts in practice Monday-Thursday, Offense and defense feed off each other’s energy causing us to feel like we have momentum at all times during the game,” Jones said.

Another reason for the improved success in Ennis is the return of its former legendary head coach Sam Harrell.

Harrell had to step down in 2010 due to a battle of his own with multiple sclerosis. Harrell was at the helm when Ennis became a powerhouse in the early 2000s winning state titles in 2000,2001 and 2004.

In 2018, Harrell returned to lead his school back into the ranks of Texas’ powerhouses and just one year later he’s almost accomplished that.

Ennis now has to go up against Aledo as their on the quest for back to back championships.

“Any other team we play we’re going to come out and hit them in the mouth early,” Spencer said.

“We need to play tough, mistake-free football as we have been,” Drake added. “I think we are hard to beat if we go do those two things.”

There’s no doubt that Ennis has a tough matchup against Aledo. But, with Harrell at the helm, anything is possible for these 2019 Lions and for many years of Lions to come.

Jones added – “just like coach says, ‘since they’re handing them out (trophies) we might as well take them.”

Aledo Rolls to 70-7 Win Over Weatherford