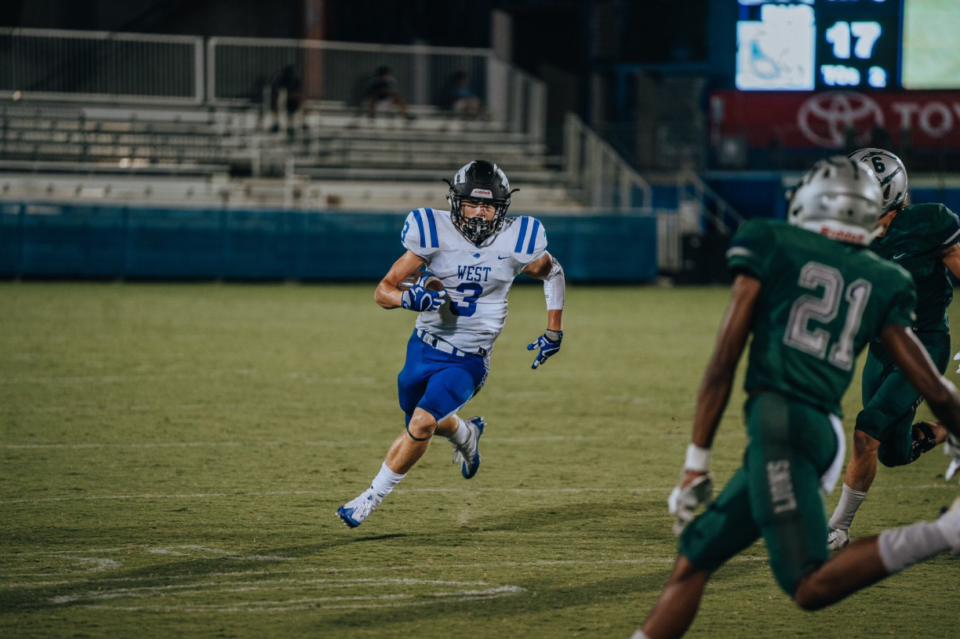 The first day of November saw one of the wildest and unimaginable endings to the Friday night lights in recent memory.

Plano West at Plano East. With seven minutes and 36 seconds left in the 4th quarter, Plano East held a 35-17 lead.

For the Panthers of Plano East, it appeared all was said and done. They had an 18 point lead on a Plano West Wolves team that hadn’t won a game since September 22nd, 2016 against Mckinney. From most people’s perspective, this game seemed over.

Then something magical started to happen.

With 4:14 left quarterback, Danny Davis found star receiver Wyatt Johnson to cut the lead to 11. No big deal, all Plano East has to do is hold onto the football, run out the clock and win the game.

Plano East got the ball and… immediately went three and out.

Plano West then went on a lengthy drive capped off by a four-yard touchdown run by Davis. With only 49 seconds left in the game the Wolves attempt a two-point conversion that proves to be unsuccessful.

Plano West needs to recover the onside kick to have any chance at all in snapping there 34 game losing streak. Considering how rare recovering an onside kick has become across all levels of football in recent memory, barring something spectacular, Plano East has won the game.

But this wasn’t any ordinary day. In a perfect storm of events Plano West miraculously recovered the onside kick, and, Plano East received an unsportsmanlike conduct penalty thus setting the Wolves up at the 33-yard line.

33 yards in 49 seconds to win the game. Davis found wide receiver Tavarius Garland immediately to set them up at the ten-yard line. A few plays later and Davis found Wyatt Johnson yet again on a slant to take a six-point lead.

Plano East got a chance at a hail mary from their own 45-yard line but alas it was the Wolves night.

The streak was finally over. For the first time in 35 tries, Plano West won a football game, and they did it in the most spectacular way imaginable.

At the end of the 2018 season, Plano West had just finished a second consecutive 0-10 season. They were only in one one-possession game all season and when you’re coming off of 26 consecutive losses, you know that it’s time for a change.

Soukup had previously served as the offensive coordinator for 6A Hebron. Hebron in 2018 posted an 8-5 record, made it to the 3rd round of the playoffs and Soukup led an offense that was scoring nearly five touchdowns a game.

Almost immediately under the Soukup regime, you could see that the 2019 Wolves were destined to break the streak.

They opened the season at Frisco Reedy, a team that went 13-1 just a season prior. The wolves played them hard and while losing 17-7 you knew it was only a matter of time.

Both sides of the football are dramatically improved from the years prior.

They were losing every single game by an average of 32.5 points.

Soukup came in and very quickly changed that narrative. Plano West in 2019 is now averaging 16.3 points while giving up 36.6. Sure, still a point differential of minus 20.3 but considering where they were that’s a massive step in the right direction.

One of the top players on the Wolves offense is a senior wide receiver, Wyatt Johnson.

Johnson in the win against Plano East caught five passes for 96 yards with three touchdowns including the game-winner.

Johnson is undoubtedly the top weapon in this emerging Wolves offense.

“I just have always been into sports ever since I was little. Football just sort of turned out to be what I loved the most and worked the most at.”

As a senior Johnson has been through it all for the Wolves and was overjoyed upon his teams’ first win in over three years.

The one word he could use describe it — “Surreal.”

“It has really been a rough few years in this program,” Johnson said. “It was refreshing to see all of the hours and sweat we’ve put into this team finally pay off.”

He credits head coach Soukup for the change of energy at Plano West.

“Coach Soukup brought a new perspective of work ethic into the program,” Johnson said. “He demands energy and effort every snap.”

When asked about his personal success, Johnson thanks the work behind the scenes.

“Working hard every day in practice gives me the confidence to perform at a high level on Friday nights,” Johnson said.

Even though he’s a senior, Johnson expects big things in the future from Plano West.

“Our team is young and has great potential to build on the success that hasn’t always been reflected on the scoreboard,” Johnson said. “We’ve had multiple games this season that were decided on three or four plays.”

People can expect to see continued success from Johnson in the future no matter where he ends up.

“I am weighing options right now, definitely going to college,” Johnson said. “I’ve been in contact with some coaches at the next level so I’m exploring options to see if I’m continuing football in college.”

There’s no doubt that head coach Soukup, his staff, and players like Wyatt Johnson have started to drastically change the culture of Plano West football.

November 1st was a perfect display of that. These Wolves don’t beat themselves up. No matter what the deficit is or how bad things look they will keep fighting and pushing through the blood, sweat, and tears to get the best possible outcome.

The days of Plano West being a bottom feeder are over, these Wolves are on the rise.