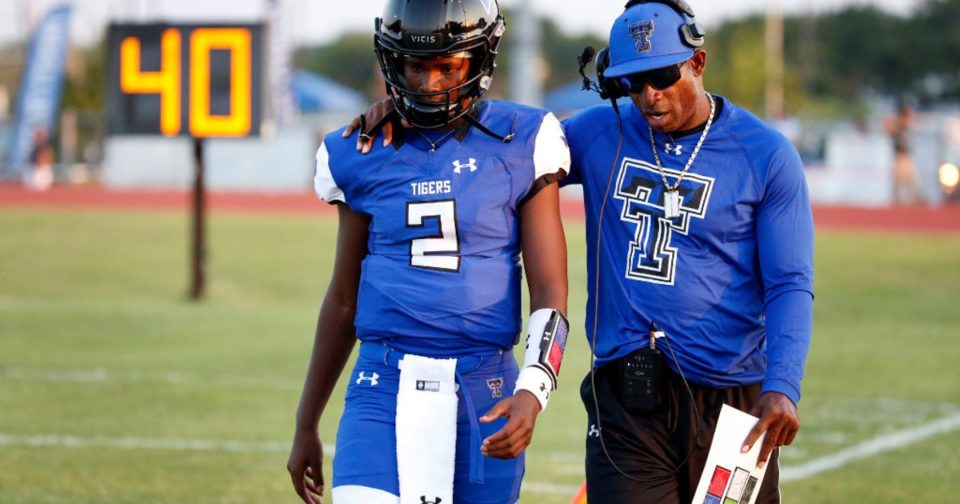 Waco- For the second season in a row the Tigers of Cedar Hill Trinity Christian were able to defeat Austin Regents for the TAPPS DII State Championship. Regents made a 15-0 run in the third quarter, but still came up short 49-24 at Panther Stadium in Waco.

Trinity Christian (14-0) dominated the first half racking up 37-points.

Sophomore QB Shedeur Sanders(18 of 24, 242, 3TDs) threw two first half touchdowns and ran for another.

Sanders spotted WR Dwight McGlothernget behind the Knights’ secondary and hit him on a 65-yard bomb to give Trinity Christian a 28-2 lead with 7:55 remaining in the second quarter.

Austin Regents (11-2) used their aggressive defense to force a safety for the first points of the game.

The Knights clamped down on the Tigers’ offense, who was backed up inside their own 5- yard line. Sanders stepped up into the pocket and attempted to run, when a Knights’ defender knocked the ball loose and recovered in the end zone.

Trinity Christian used their rushing attack and massive offensive line to wear down the Knights’ defense.

Austin Regents’ QB Wilson Longput the team on his back in the second half.

After a six minute defensive struggle, Long weaved his way through the Tigers’ defense and ultimately found the end zone with 2:45 remaining in the third quarter.

Austin Regents carried the momentum into the fourth quarter and Long found John Roberts for an 11-yard touchdown strike, that cut the Tigers’ lead to 37-24.

Hartfield would ultimately crush the Knights’ momentum, with a 45-yard scoop-and-score off a fumble and Trinity Christian recaptured control of the game.

Duncanville stomps all over Southlake Carroll 51-7