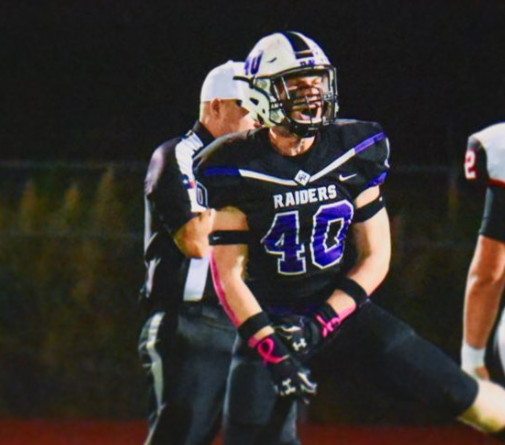 Cedar Ridge has been the model of consistency this decade. Opening in 2010 they’ve made the playoffs every season since 2013. They’ve had winning seasons every year since 2015. In 2017 they made a run to the state semifinals finishing the year 13-2.

In 2019 they took a step back. They still made it to the 6A D1 playoffs, but they fell to Cypress Woods by 14 in the first round ending their season at just 6-5.

In 2020, they look to reclaim those deep playoff tuns they once had. One reason for future success is due to the elite play of star linebacker, Brett Hartgrove.

Hartgrove is a 6’2 225-pound linebacker who’s a three-year starter for Cedar Ridge. He comes into 2020 as the captain for the defense.

“My preparation in the film room is a big part of my success on the field. In addition, being as physically prepared as I can. My drive has always set me apart as well,” Hartgrove said on his success. “Knowing where I need to be and giving every play all I have is some of my best qualities when it comes to performing on the field.”

Hartgrove is one of the more menacing linebackers in 6A. A guy who can do anything that’s asked of him on the field. Attack the quarterback, stop the run, ever sit back in coverage, Hartgrove can do it all.

At the end of April, Hartgrove’s hard work started to pay off as he received his first offer to play football at the next level. The University of Arkansas-Monticello has given Hartgrove an offer, and others such as Columbia are showing interest.

“The recruiting process has been different for sure. I currently hold one offer. However, with the pandemic going around it hasn’t been traditional. I’m talking to schools all across the country working hard to find the best fit for me and my family,” Hartgrove explained.

COVID-19 has put a damper on recruiting. Especially for kids who came into their junior years with not a whole lot of recognition. Hartgrove though has been persevering to get his name out there through his hard work and work ethic.

Hartgrove has also been busy keeping himself in peak physical shape during this national pandemic.

“Quarantine has been good to me physically. We have an at-home garage gym that we’ve been utilizing daily as well as getting on the field as much as possible. Big strides have been made for me and my brother Tyler. We didn’t miss a beat when this happened and got even more work than usual. We’re going to come out more prepared than the others who have been using this as a vacation,” Hartgrove said.

2020 is Hartgrove’s final year to make a splash with Cedar Ridge. After a 13-2 freshman year, followed by a 9-3 sophomore year and a 6-5 junior year Hartgrove would like to have his final year be his and his teams best.

“For the Cedar Ridge Raiders this season the goal will be to get back to our championship-caliber program. These past two seasons haven’t been as fulfilling as the seasons before. We’re looking to take back our district championship title and make a run in the playoffs,” the captain linebacker said.

Brett Hartgrove has been an amazing leader and player for this RRISD program for the last three seasons. He’s genuinely one of the most versatile linebackers in the state of Texas. He’s one of the best we have to offer and he’s looking forward to showing everyone that in 2020.

“Fans should know I’m a competitor. I love having fun out there and getting after it with my teammates. But most importantly I want to win, and have a good time doing it,” Hartgrove said.