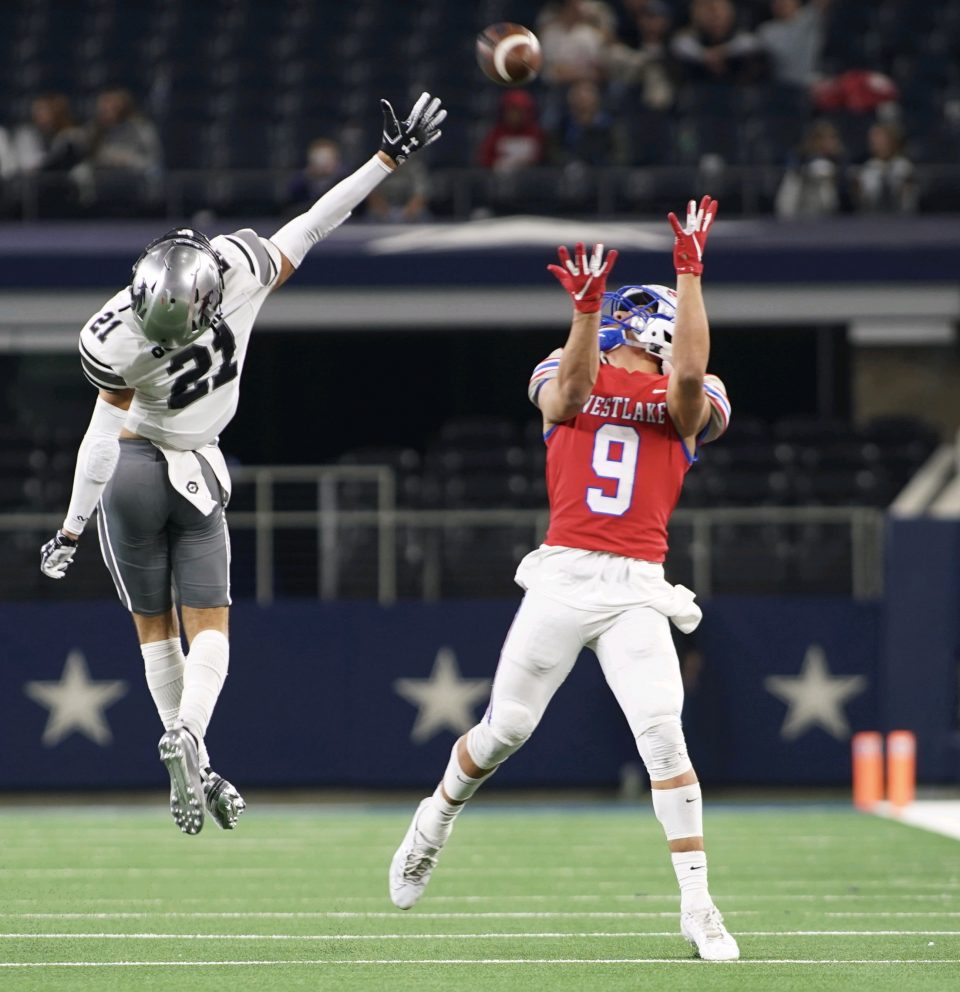 Last year, the last game inside of AT@T Stadium and the last game of the Texas football season was the 6A D2 title game in which Westlake defeated Guyer 24-0.

A big part of the championship game was the passing attack of Westlake. Senior quarterback Kirkland Michaux set the tone with his three-headed monster of wide receivers. Seniors Ryan Lindley and Mason Mangum had big days as they each totaled over 1,000 receiving yards on the season.

The third head of that monster last year was freshman Jaden Greathouse. Greathouse still has three years at Westlake and now with four-star signal-caller Cade Klubnik taking the helm, Westlake looks to be a tough out for years to come.

Greathouse as just a freshman hauled in 47 receptions for 715 yards and 10 touchdowns for Westlake in 2019. 247Sports recently put out their top 100 players for 2023 and Greathouse with a rating of 91 is the 44th ranked player in the nation, the best at his position, and the second-ranked player in the state of Texas.

“I feel super blessed to be top-50 and appreciate the recognition. But I wouldn’t be where I am without my teammates or my coaches,” Greathouse said on the ranking.

Greathouse as a freshman already showed that he can be a great wide receiver for years to come. Now he’s got three more seasons as the Chaparrals number one option.

Westlake and all the other 5A-6A programs had their seasons are pushed back five weeks due to the COVID-19 pandemic. Greathouse is trying not to focus on that nor the lack of fans to deter him from having another great season.

“I haven’t thought about no fans or reduced numbers. We’re just focused on starting practice and getting back into our routine,” Greathouse said.

Greathouse and new quarterback Klubnik are going to be one of the best 1-2 punches in the state of Texas for the next few years. They’re both four-star talents with the ability to jump up to a five-star level.

Greathouse though wants another state title not just in the future, but this next year.

“Our goal is to win a district championship and win another state title. I’m just focused on doing whatever I need to do to help my team achieve those goals,” Greathouse said.

Regardless of what their team success ends up being, Jaden Greathouse is clearly one of the top players in Texas for the 2023 class. He already has offers from Baylor, Oklahoma, and Texas. There’s no doubt that you’ll be seeing Greathouse catch passes every Saturday and even Sunday.

“Fans should know that I’m not focused on offers or rankings, I’m only focused on playing well for my teammates and coaches,” Greathouse said.