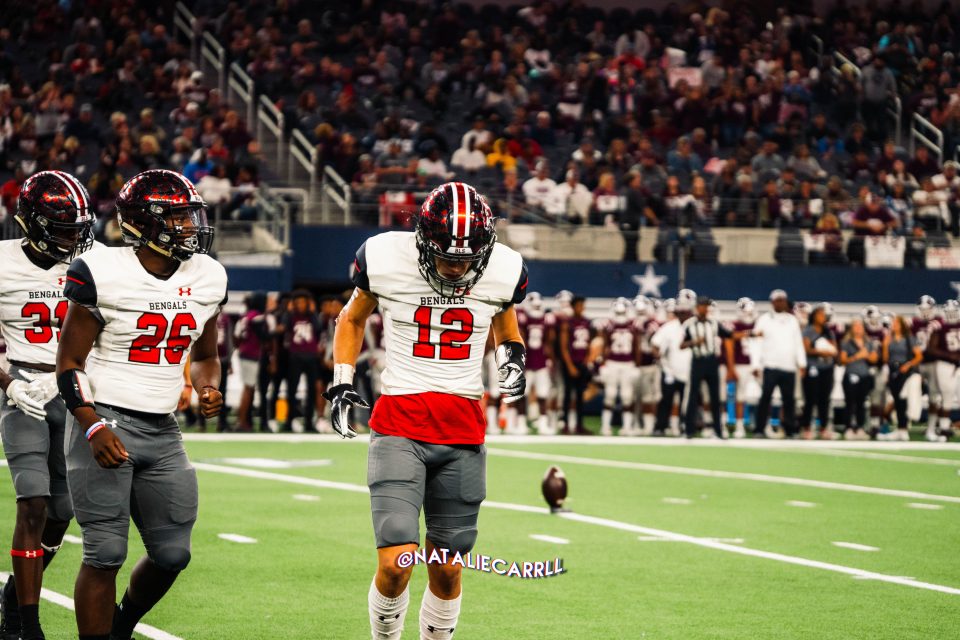 “We have worked very hard in the offseason in hopes that what we did last season will carry over,” Jaylon Banks said.

“I feel we can keep the momentum going, with myself and the rest of the seniors to lead the younger guys and fill shoes from last year’s seniors,” J’Kalon Carter said.

Those are the quotes from Braswell seniors as they enter the 2020 season. Last year, Braswell had their most successful season in program history. Nine wins, most in team history, and a playoff win. Due to the team’s success and their leap into 5A prominence head coach Cody Moore capitalized and took his talents to Plano to become their new head coach.

That was until one day later when Braswell announced that Moore would in turn be returning to Braswell instead. The Bengals are going to need him as they make the leap to 6A this year and are stuck in a district with four other playoff teams from last year, (Allen, Guyer, Mckinney, Prosper.)

The pandemic has put a lot of things, including this off-season on hold. With Moore back, that brings a sense of normalcy to Braswell in a year that nothing has gone to plan.

“Offseason was rolling pretty good as a team until the pandemic, It has its pros and cons but in my eyes, I think quarantine was the best thing that could’ve happened for me, I’ve never worked as hard in my time playing football,” Carter said.

“This off-season was very different in all aspects, but we took whatever we could and made the best out of every situation. A lot of zoom meetings and personal workouts on our own. We embraced and came out better than before. And when we were able to start in the fall it was just a great atmosphere to be around and felt good to be with all the guys again, and we went straight to work!” Quarterback Tristan McClary added.

“This offseason has been quite chaotic I must say with COVID but it also gave me a lot of time to work and better my craft so I had to adapt,” Banks said.

Last season Braswell was one of the most stellar offenses in all of Texas. Greyson Thompson led the charge completing 61.5% of his passes for 3,315 yards and 35 touchdowns. He’s moved on but the top four receiving threats are all back for Braswell’s inaugural 6A season.

McClary was used like a Taysom Hill last year. Now, he’s been given the keys.

“You can expect nothing but great things from Tristan,” Carter said. “He’s an explosive player, great leader, and teammate who’s playing with a chip on his shoulder. I can’t wait to see what he does Friday and further down the road.”

“I can tell you he will be ready to take the big role that Greyson had last year and that he’s worked hard and is a ballplayer and will do what is needed to win,” Banks said who had eight catches for 90 yards last season.

McClary has loads of weapons in this Bengals offense including potential break out wide receiver Lezeric Bailey who’s also a star hooper.

Braswell has a lot of expectations and a lot of talent in 2020. However, they have a tough road ahead of them as week one, they have to take on state semifinalist from a year ago in 6A D1, Rockwall, and quarterback Braedyn Locke.

Last season Locke threw for 4,282 yards and 53 touchdowns as just as a sophomore. The good news for Braswell nation is that Rockwall will be without star wide receiver Jaxon Smith-Njigba who last season caught 108 passes for 2,161 yards and an absurd 35 touchdowns.

Braswell is confident they will come out swinging Friday night.

“Rockwall is a very good program in the 6A division, but though we are new to the new division don’t count us out. You can definitely expect a good game between us, and for us to come out swinging. We are ready to take on all the challenges, and prove all the doubters wrong,” McClary said.

“I think you can expect a new 6A team who embraces any competition, who is going to come out there like we’ve been there before,” Carter added. “We know what they bring to the table, it’s all about what we do and our confidence.”

“I’d like to first say we always are going to come out and expect a win regardless of the competition. But you can’t predict a win or loss, the one promise I can give you is that we will compete,” Banks said.

Yes, it’s Braswell’s first year in 6A. Still, expect big things out of McClary and that offense as they look to march to the playoffs for the second straight season.

What can we expect from the Bengals? Take it from the players themselves.

“Our Goal is obviously a state championship,” Carter said. “But a big goal to get there is to take everything one game at a time, focus on the now, and control what we can.”

“We plan on taking a big run this year and hopefully go deep in playoffs,” Banks added.

“As I mentioned earlier, there is a lot of doubt on us because we are moving up a classification, but the guys and I see that as an opportunity to prove all those haters wrong. We embrace that and work every day to make sure we go out on that field and prove to everyone that we got what it takes. We believe it’s our time and we are gonna make a huge splash in 6a this year. It’s gonna be a great season for us Bengals,” McClary said.