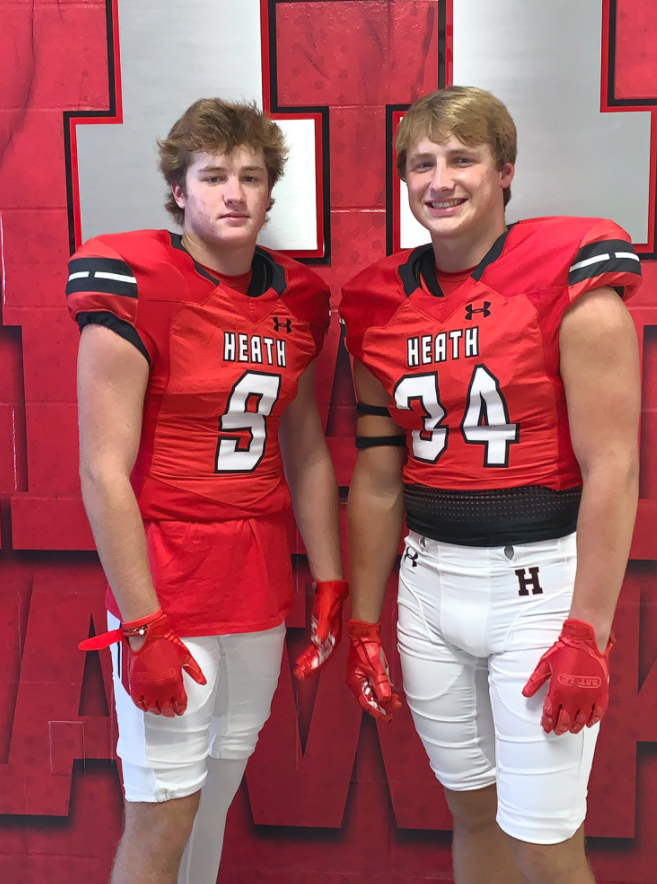 Quarterbacks now more than ever, are getting better at younger ages. Last year among others we saw Quinn Ewers (Carroll) Braedyn Locke (Rockwall) and Garret Rangel (Lone Star) all show that they can be elite quarterbacks. Oh ya, and they were all sophomores.

One quarterback forgotten in that list of great sophomore quarterbacks last season is Rockwall-Heath’s signal-caller, Josh Hoover. Last year, Heath switched from a run-oriented offense to a spread attack with Hoover. While Heath did only win five games and as a result, missed out on the playoffs, the offense as a whole was one of most exciting in the DFW area.

Hoover is sensational and Heath in their second year with him should make a playoff run. The spread attack though doesn’t work without an elite wide receiver no matter how great the quarterback is. Heath’s elite weapon is none other than Corban Cleveland.

Last season, Cleveland was a first-team All-District selection as he hauled in 75 passes for 975 yards and nine touchdowns receiving. That averages out to seven and a half catches for 97 yards and a touchdown per game for the star wide-out.

This year, Cleveland is expecting more.

“Last year was a great year for me but I’m not content with it… I’m looking to be first-team All-State as a senior and lead my team to a state title for the first time in Heath’s history,” Cleveland said.

Whoever makes the most noise and makes a deep playoff run is not only going to be the best team but especially this year during the pandemic, the most healthy team. This off-season more than any other was important in order to prepare these student-athletes for the adversity they face ahead this wild season.

One thing that’s also grown during the off-season is Cleveland’s connection with the aforementioned Hoover. That connection is going to have to be rock solid for Heath’s success this season.

“The connection between me and Josh only gets better day by day. We have a lot of plays designed for me and Josh to make certain reads and this being our third year together we never seem to miss a beat,” the All-District receiver said. “He’s a special guy with a great future ahead of him. I’m just happy to be his teammate and friend.”

This Friday, the Hawks open up their 2020 season against another exciting offense as they will face off against Lewisville and Boise State commit Taylen Green at quarterback. It should be a fun matchup that serves as a measuring stick for each program to see just in fact how good they are and can be.

The Hawks are going to be good on offense we know that, but Cleveland believes that defense in this matchup can propel them to a win in their season opener.

“You can expect our offense to be more explosive and more efficient. Our defense will contribute to the win by making big-time plays. We’ve improved drastically on both sides of the ball,” Cleveland said.

Get excited Rockwall-Heath fans, this team is going to be very fun to watch this year. In the past two seasons, they’ve gone 8-12 and they haven’t made the playoffs since the 2017 season when they went one and done. In 2020, they may win more games than the past two seasons combined and have a far longer playoff run. The Hoover-Cleveland connection is going to be one of the most electrifying in the state of Texas in 2020.

“From Heath, you can expect a coming-out party. We are flying under the radar but we are coming for everyone this year and we have a special group that can do it. It just takes leadership, focus, and having the mentality to beat anyone. I’m looking forward to this year and seeing what I and my brothers can accomplish,” Cleveland said.