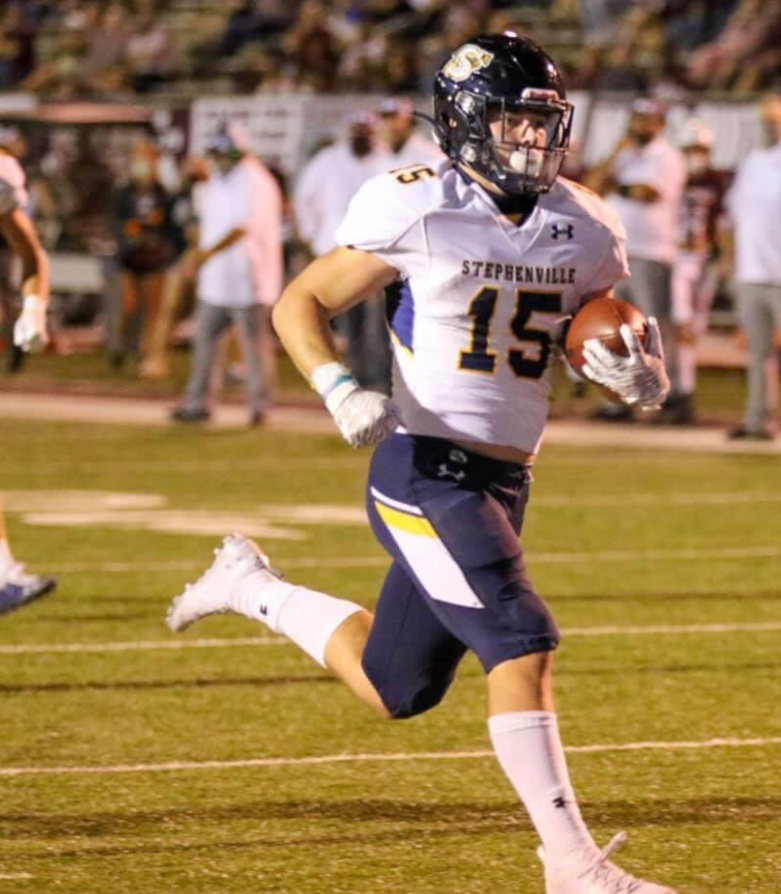 With every season of Texas football comes wins and losses. Hello’s and goodbyes. Spectacular triumphs and heartbreaking defeats. Not everyone can win the big one. Not everyone can have big moments or an amazing career.

This past weekend, we saw the end of one of the greatest, yet most underrated careers in all of Texas. Kason Philips, Stephenville running back played his final snap at Stephenville.

Philips has been the lead back for the Stephenville Yellow Jackets for the past few years leading them to a 12-11 record. Last year, the Yellow Jackets took a 5-4 record into the playoffs until they ran into a buzzsaw in the form of 4A D1 powerhouse Argyle. This season much of the same. Another six-win season, another loss to the undefeated Argyle in the 4A D1 area round.

“It wasn’t the way I would’ve pictured our season, but through all the adversity and challenges we faced we did everything right, so it didn’t feel good,” Philips said on Stephenville’s season. “Our guys did great and I wouldn’t ask for any other team to be apart of.”

The star running back not only ran his way to a great season but he also ran into the Stephenville High School record books. Philips broke the Stephenville record for most rushing touchdowns in a season. The previous record was 28 set back in 2008. What’s more impressive though is that Philips eclipsed that record in just 12 games. In 2008, Stephenville played 14 games.

Philips also solidified himself as the greatest running back in Stephenville history as he also broke the record for most rushing touchdowns in a career. The previous record was set at 40 rushing touchdowns from Brad Mills. Philips will finish his career with 46.

“It feels really good,” Philips said on breaking those records. “ There have been a lot of running backs to come through Stephenville and it feels great. A lot of rich history in Stephenville and I had a lot of the great ones reach out and congratulated me.”

You can see Philip’s value looking at his 2020 game log. In 10 of 12 games, he had more than 100 yards from scrimmage and at least one touchdown.

Despite the loss, Philips ran all over one of the best teams in Texas, Argyle. Stephenville was one of just four teams to put up north of 20 points against them this season so far.

Philips after his illustrious career at Stephenville with nearly 3,000 rushing yards now looks toward the future after high school.

“I still believe I’m very underrated,” the star running back said. “I’ll be working out, gaining weight in muscle and speed while trying to market my skills to earn some more offers.”

Philips has a point. There are so many standout athletes especially in football year in and year out it’s nearly impossible to keep track of all of them. Kason Philips though, watching him play, rose above the field.

His vision, speed, and strength for his size are through the roof. Even against the best competition he still finds a way to get involved. How many people can put up 258 yards of scrimmage and three touchdowns on Argyle?

Philips at the moment has four offers from Austin College, Birmingham-Southern, Hardin-Simmons University, and Hendrix College. That’s an absolute travesty.

Philips is a guy who should get unequivocally get another look from scouts. He’s one of the most underrated guys in the entire nation.

Where Philips ends up is anyone’s guess. However at this point, for now, we should look back and celebrate the great career he had. It’s genuinely one of the better ones in all of Texas and it, unfortunately, came to an end on Thursday night.

“It’s the best of the best. it’s the best place to watch a high school game and it’s just different and I’m glad to be apart of it,” Philips said on what Texas Football means to him.