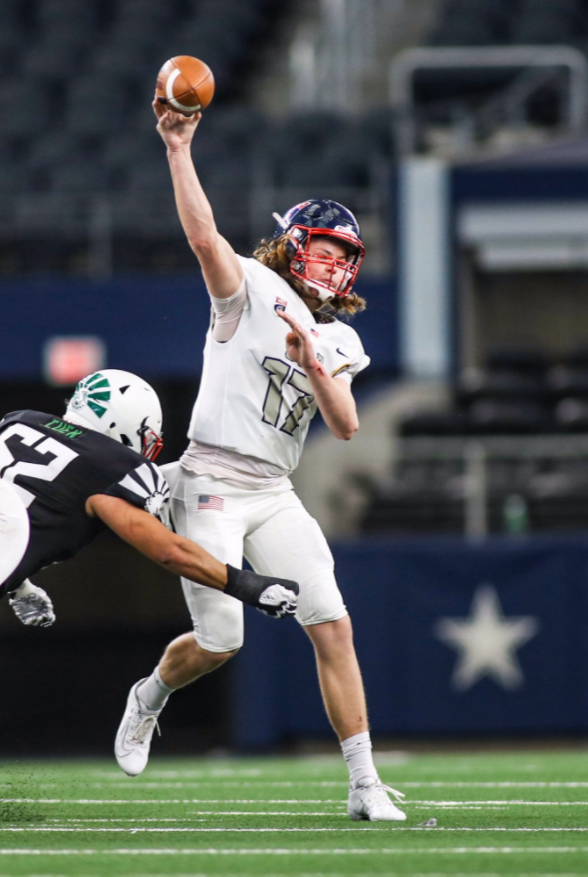 Ennis has one of the proudest football programs and loyal fans in the state of Texas. No matter where they are playing, it always feels like an Ennis home game. Ennis last year showed everyone that they’re here to stay.

The lions had a 12-2 season. Their losses were a seven-point loss to Bishop Lynch, and a seven-point loss in overtime to state champions, Aledo. Aledo has had a stranglehold on 5A D2 football for a decade now. They’re the team to beat. Ennis though has a secret weapon. A weapon that could propel them to the top of 5A D2 for the next few years. Meet 2023 quarterback, Jackson Gilkey.

Gilkey is highly regarded as one of the top quarterbacks in the 2023 class. Gilkey is 6’3 200-pounds and can move like a sprinter. As a part of Ennis’ freshman team, Gilkey led the Lions to a 7-3 record.

“Hard work both on and off the field. I work with my coaches at Ennis, and several outside coaches (Brett Bowers – Speed and agility coach; and Brad Frasier (Old School QB) – quarterback coach,” Gilkey said. “I also work hard in the classroom, with my 4.0 GPA. I love working out, whether it’s in the weight room or just going to the practice field and doing footwork drills and throwing into the practice nets.”

Ennis is one of the best programs in the state of Texas. They hold five state titles in football, four of them coming from 2000 and on. The community of Ennis rallies around its team like family every Friday night.

“The community of Ennis supports Ennis football, very much like Friday Night Lights. Coach Harrell and the staff and administration work to build a family environment in the locker room, and we all look out for each other,” Gilkey said.

Ennis is a huge threat to knock off Aledo. They were close last year, this year they liked primed and ready to do so. If anyone can, they have maybe the best shot to do so.

Collin Drake will more than likely be the starter going into 2020 and for good reason. Last year he threw for 2,524 yards and 23 touchdowns while running for 962 yards and 12 touchdowns. Drake is going into his senior season as the man at Ennis. But, Gilkey in 2021 will be the next man up for the Lions.

“It has been my goal since moving to Ennis to start for the Lions, and if I am able to attain that, I would have accomplished one of my many goals for myself,” Gilkey said.

Gilkey has started out his career tremendously at Ennis. Whether he’s backing up Drake, getting limited time, or being the starter, he’s optimistic about his and his team’s future.

Harrell battled back though and by 2018 was hired back on as the head coach.

Jackson Gilkey is a name that people not only in Ennis but all over Texas will soon know. He wants the Ennis Lions faithful to know a few things about him before he steals the show every Friday night.

“I’ve played quarterback since I was five years old. I am a sneakerhead, and I work at the Smoothie King in Ennis (that my parents own), and we live on a 50-acre farm,” Gilkey said.