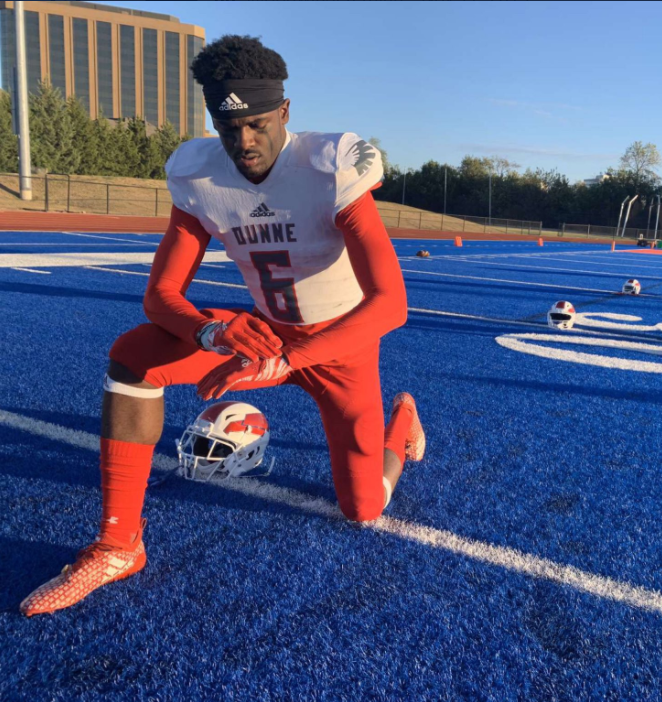 Two years ago, Bishop Dunne defeated Bishop Lynch 13-9 to win the TAPPS D1 state championship. Just one year later, they finish 4-7 and lose one of their best defensive prospects in a linebacker, Jeremiah Bodwin.

Bodwin announced at the beginning of June that he would be transferring to the home of the defending state champions, Parish Episcopal. Two weeks later, Bodwin made another announcement. One for after his senior season. Bodwin made public that he will be taking his talents over to Reno, NV to play for the Nevada Wolf Pack.

“I chose Nevada because of the genuine love the entire staff showed me, even as a recruit that was just offered. Up until my commitment, Nevada has been relentless about me and that’s something I couldn’t ignore. Furthermore, aside from football, I see the environment and atmosphere of Reno and instantly know that’s a place I would love to be at. I believe we can truly build a great football team and win some games!” Bodwin exclaimed.

Bodwin is a three-star prospect via the 247Sports Composite rankings. He’s listed as the 76th ranked linebacker in the 2021 class and thus the 171st ranked player in the state of Texas.

“I think that the people around me who’ve played a role in instilling a solid foundation of good character, work ethic, and determination have led to my success. My parents have raised me to have the right mindset that can be applied to all parts of life. But in particular to football, I always come back to the lessons my parents have taught me about mental toughness. In regards to football, the game is 80% mental. I think this is the pillar that I’ve built my success,” Bodwin explained.

Bodwin acquired an array of offers from top tier programs like Michigan State, Georgia Tech, and others. Bodwin in total accumulated 17 offers.

“The recruiting process was a bit slower in the earlier parts of quarantine, soon after though it picked up pretty quick. I went from about eight to 17 offers within two-two and a half months. It was pretty surreal, Bodwin said. “I noticed that I was getting a lot of interest and offers from the Mountain West. Throughout that entire process, Nevada remained my top school in that conference. It’s always been a personal favorite of mine. When the decision was finally made to become apart of the Wolf Pack, it definitely felt like the right thing to do.”

Bodwin not only transfers to the defending state champions. He’s also transferring to a team that averaged less than two touchdowns a game last year on average. Parish Episcopal also returns one of the best quarterbacks in the nation with 4-star signal-caller Preston Stone. They look more ready than ever to go back-to-back.

“The goal for Parish this year is to develop into a better player before the move to Reno after graduation. I know Nevada has plans to develop me into a monster of a player, and so I’m not so much worried about putting on tons of weight and muscle more than I am at just getting to be a better player and sharpening my skills up for college,” Bodwin explained. “I want to win another state title as I did with Bishop Dunne in my sophomore year. At Parish we’re the defending state champs of last year 6A TAAPS so we plan on taking it again with my buddy Preston Stone, four-star SMU commit.”

Bodwin is going to be at three different programs in three years. Bishop Dunne this past year, Paris Episcopal this year, then Nevada University next year. He’s already won a state title, success follows him wherever he goes. He hopes to rub that off again on Episcopal and Nevada.

“Fans should know that I’m excited about Reno and can’t wait to get out there and ball! Coaches see great things in me and I’m here to work the hardest to make the city proud! I’ll be sure to put on a show for them all!” Bodwin said.