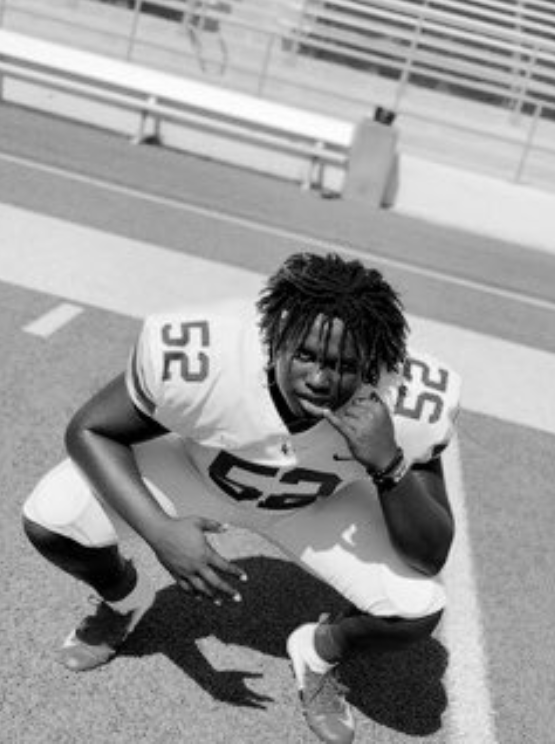 Say hello to the best center in America. 247Sports recently updated their rankings of offensive players and one of the biggest jumps was that of Lakeview Centennial’s center, Ezra Oyetade.

Oyetade made the jump to being a four-star recruit and according to 247Sports, the top center for the 2021 class.

“All glory to God, but as far as myself I just block out all and any negative things,” Oyetade said. I focus on doing whatever I can do to become a better version of myself while trusting that everything will work out fine and keeping positive energy,” Oyetade explained.

Oyetade along with being his class’ number one center, is also the number 40 ranked player in the state of Texas and number 242 nationally.

“I’m still the same guy I was in January when I had zero stars and zero offers,” Oyetade said. “But, it is a blessing to be able to see that all the hard work and dedication is paying off; however, it does not stop here.”

Oyetade went from no offers to being the best of the best in just a few short months. Even more impressive is that he didn’t become a center until the end of his sophomore year. He’s basically been doing this for a year and is already the best at it.

“Our Head Coach at Lakeview Centennial needed a center towards the end of my sophomore year due to the senior center being injured,” the 6’3 285-pound machine said. “After I got the hang of it he kept me there because he believed I had a great amount of potential at the position.

Oyetade at the moment has 26 offers with pretty much all of them coming from the last four months. Arizona State, Boise State, SMU, Vanderbilt, and Virginia are some of the top schools that Oyetade has received offers from.

Oyetade broke through his junior year at center for Lakeview Centennial. He was named to the first-team all-district team for 10-6A. Along the way, he propelled Lakeview Centennial to a 6-5 record, most wins since 2016, and a playoff berth in the 6A D2 state playoffs.

With Oyetade at the center position, anything is possible. No one is breaking through the middle on the Patriots offense anytime soon.

“As a whole, we are looking to win ourselves a district championship title and advance deep into the playoffs,” Oyetade said. “I believe we have every bit of talent to do so.”

Oyetade and the Lakeview Centennial Patriots virtually avoided any sort of realignment this go around. Their district remaining unchanged from 2019 to 2020. They finished fourth in the district last year, squeaking into the playoffs only to get blown out by Dallas Jesuit.

Now, Oyetade has another year of experience and is ready to go for 2020. The nation’s best center for 2021 is right here in Garland and is ready to show everyone why he’s regarded as such.

“I’m an outdoors guy, I have three horses and I’m the president of our schools FFA where I show my Beefmaster heifer. I’m also in the collegiate academy at my high school and will graduate high school with an associate’s degree.”

Oyetade can really do everything.