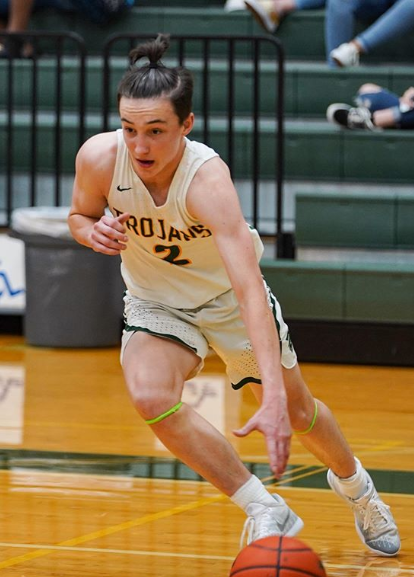 Every year, no matter what the sport, some team always comes seemingly out of nowhere to make a run at a championship. In the NFL, it was the San Francisco 49ers. In professional baseball, it was the Washington Nationals. In Texas High School Basketball, that team is the Newman Smith Trojans.

“The key to our success is just Keep buying into the team defensive process and playing hard together and trusting one another to do our job,” Newman Smith leading points scorer Jarren Cook said.

The Trojans after a 16-10 record last season, and back to back sub .500 seasons the years prior, are sitting in the area round of the Texas 5A regions 2 & 4 state playoffs with an astounding 28-0 record.

“Chemistry… we’re best friends on and off the court,” Thibaut Tagnon said on the teams’ success. “We’ve been playing together forever and no matter what we stick with each other.”

The Trojans are in uncharted waters for their basketball program, they haven’t made it past the second round of the playoffs since the 2005-2006 season. This Friday, they’ll have a chance to break that streak as they match up with 16-10 Frisco Centennial.

“This year’s team compared to last is growth and understanding how to play the game together better,” Cook said. “We always had a good shooting team we just needed to put it all together.”

“Everyone knows their role, last year was a bit hazy but now each player knows what their job is on the court and it helps us play the same way every game,” Tagnon added.

Newman Smith has been lights out both offensively and defensively this season. Newman Smith on average scores more than 82 points a game, one of the top marks in Texas. With that they only 54.5 points a game, good for a point differential of an absurd 27.5 points.

They’ve come into the playoffs as hot as Steph Curry in an open gym. In the month of February alone, they’re winning games by an average of more than 30 points including a 107-46 win in the bi-district round of the playoffs.

Two players who have been vital in the Trojans success this season are future Sam Houston State recruit, Jarren Cook, and junior Thibaut Tagnon.

Cook is averaging nearly 20 points a game with four rebounds and three assists a night while Tagnon compliments him with 13 points, two rebounds and four assists of his own on average per night.

“My personal success comes from plain old hard work. Putting the time in the gym over years trying to get better each time it all started with my Dad,” Cook said on his success. “No secret to this just grind and get better.”

“Hard work, just getting into the gym whenever I can to put up shots or work on my handle. It helps me build my confidence which is crucial in games,” Tagnon added.

While ultimately, getting to the third round of the playoffs for the first time in over a decade would be amazing, the Trojans obviously have one goal in mind, winning it all.

“Having each other’s back, we’ve felt pressure before and if we stick together through any adversity we may face, I believe we can win it all,” Tagnon said.

Newman Smith first opened its doors 45 years ago in 1975. They’ve never won a state championship. The 2019-2020 Trojans have every intention of being the first.

“For us to win it all it will take for us to really stick together as a team on and off the court,” Cook said. “Continue to execute what we do best and just continue to do what we have been doing to get us here now.”

The Trojans have taken the state by storm this season as one of the most dominant teams this season. They’ve proven themselves tried-and-true in the regular season. To become an all-time great, they have to win it all. When you have this team’s determination though, anything is attainable, just ask Thibaut Tagnon.