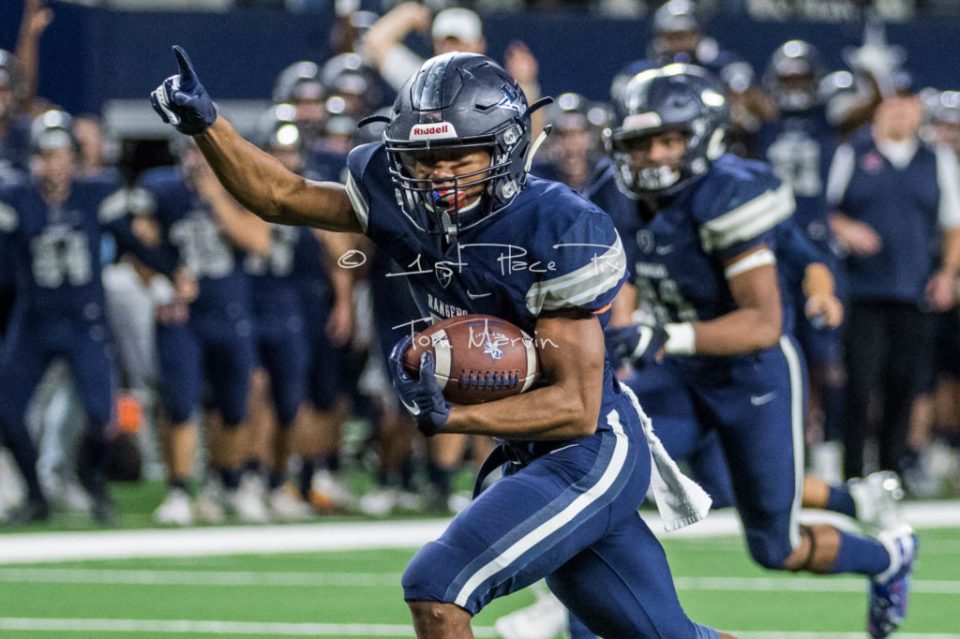 Rangel, Mims, and others were huge contributors to Lone Star’s magical 14-1 season. The man who put them over the top though, particularly to knock three-time defending state champion Highland Park out of the playoffs, was running back, Jaden Nixon.

After a missed Highland Park field goal in overtime, Lone Star took over. A first and 15 at the 18-yard line turned out to be history in the making. Handoff to Nixon, a hole opens, Nixon makes one man miss and he’s gone. Lone Star wins.

Nixon has parlayed that success into his recruiting, where recently he announced he will be heading up north to be an Oklahoma State Cowboy.

“What led me to Oklahoma State is the great atmosphere of fans, coaches, athletes, and facilities,” Nixon explained. “Oklahoma State has so much to offer in not only football but academically. I know a fair share of people who went there and some that go there now and talk about how much they enjoy it.”

Nixon as a junior last season carried the ball only 90 times but he made the most of it rushing for 14 touchdowns and 821 yards. He also caught 18 passes for 262 yards and two more touchdowns.

“I’d have to say my family without a doubt, the 5’10 170-pound running back said on what leads to his success. “Whether it’s by blood or by choice they all push me to be better and we all have common goals. We pick one another up in times we are down and celebrate each other’s success no matter big or small. There’s never a dull moment with them and you always know that you’re loved.”

Lone Star has a little bit of an uphill battle in 2021. They lose Mims to Oklahoma, defensive leader Jaylan Ford is moving on to Texas, on top of that they’re in a brutal new district. Denton Ryan, who ended Lone Star’s year last year will be there, along with Independence, The Colony, Reedy, and Wakeland, all teams who made the playoffs a year ago.

Nixon though isn’t concerned and has high expectations for the Rangers.

“I’d have to say win a state championship! We were so close to winning one last year but came up short. We lost some talented players but we have some amazing guys that can roll this year as well,” Nixon explained. “Another goal is to get everyone an opportunity to go to college whether it’s in sports or for academics. I want to see the whole team succeed from the seniors to the incoming freshman. Just leaving behind a legacy that goes beyond football.”

Nixon is gonna be a stud again for Lone Star in 2020, and for years to come for Mike Gundy and Oklahoma State. Oklahoma State has earned the commitment of five Texans for the 2021 class. A class that is ranked as the fifth-best in the Big-12 and 42nd nationally via 247Sports.

“I’m just another player who loves the game of football. A goofy guy just chasing his childhood dreams, bettering myself and people I meet along the way,” Nixon said.

Oklahoma State fans, get hyped for the future.