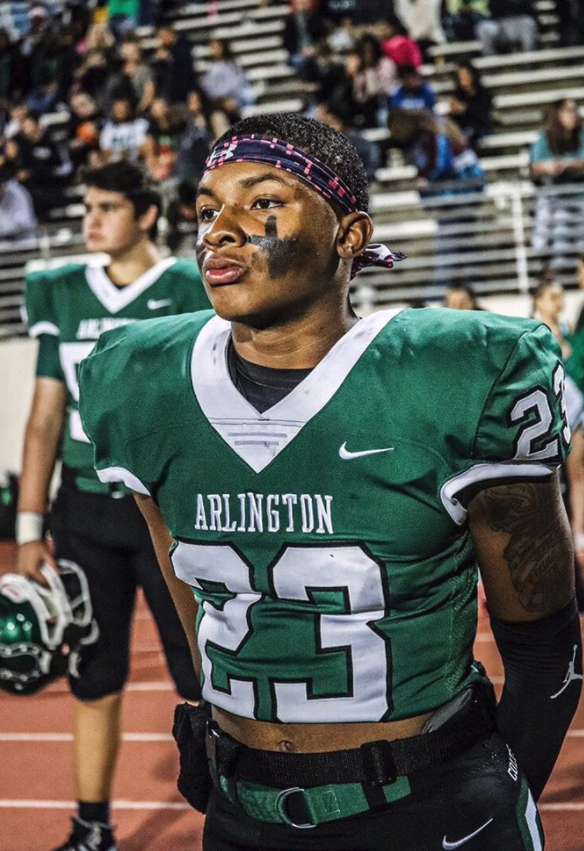 The Arlington Colts are incredibly underappreciated. A 9-4 team last year, who’s returning a top-level quarterback in Kris Sims and a stout defense to go with it. Don’t be surprised if the Colts make even more noise as last year they made it to round three of the 6A D2 playoffs before falling to the eventual runner-up Guyer.

One piece of that incredible defense is safety Richard Toney.

“Coach Sky Jones and the rest of the coaching staff are really good men. once they offered me and started recruiting me I talked to coach Sky Jones every day, as I got to know more about the program more every day loved it!” Toney exclaimed. “Everything about it, the atmosphere, and everything they have to offer! They also have five Safeties leaving, so I will be a true freshman and I plan on starting.”

Toney is a leader of the Arlington defense. A defense that let up just 18.5 points per game on average last season. The 6’0 170-pound safety put up 96 tackles, four sacks, 14 passes broken up, a forced fumble, and an interception last season for the Colts.

“I would have to say with my circumstances and everything that goes on in my life I have to have that drive and dedicated mentality, I take my pain out in football I love the physical aspect of the game. When I’m on the field I feel free, getting to the pros has always been my dream since I was five, I never that let anything get in the way of that and continue to work hard. I’m just trying to feed my loved ones,” Toney explained.

Toney and Arlington have a lot of expectations in 2020. They had a great run the prior year, but are looking to take it up a notch this season. Toney has a lot of personal goals he would like to achieve as well this year.

“My goal for 2020 season is to keep doing the same thing I been doing but better, make plays and be a playmaker! I want to get my hands on the ball more, have at least five interceptions to create more turnovers for my defense. I want to be first-team all-district and many more awards. As for my team goal, I want to go undefeated during the regular season and get past the third round. We make it that far we gotta get to the ship!”

Toney has become the first hard commit for Southern’s 2021 class as he committed on July 28. Expect to hear his name more and more every day in the years that follow.

“Fans should know I’m a great young man, hardworking, and I’m going to always give my best effort and put my best foot forward,” Toney said.