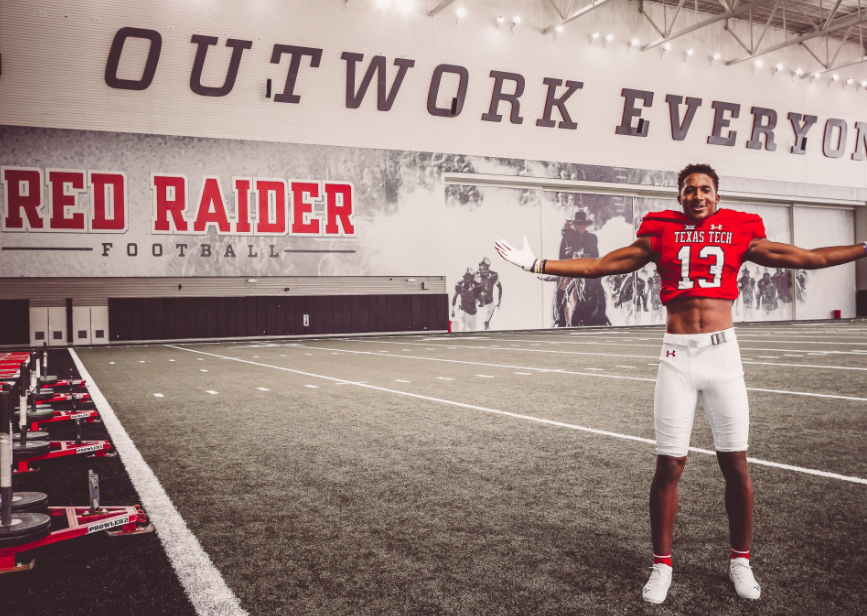 DeSoto got realigned to the new ‘district of doom’ for 2020-2022. They’re stuck with rival Cedar Hill, Duncanville, Mansfield, Lake Ridge, Waco, Midway, and Waxahachie. It’s a grueling stretch of district games against some of the best of the best that Texas has to offer.

It’s going to be a bloodbath to figure out which four teams come out of this district to make it to the playoffs. DeSoto quarterback Samari Collier has had a great offseason. After a great junior year with DeSoto, he decided to commit to Illinois after his senior season. Now, he gets one of the best receivers in Texas for his final year with Texas Tech 2021 commit, Jerand Bradley.

Bradley played his junior season for TAPPS’ John Paul II in Plano. He alongside Elite 11 finalist Grayson James, led the Plano school to a 10-4 record and an appearance in the TAPPS D1 championship game. He helped John Paul II go from no playoff wins to a state championship appearance.

For his senior year, he wants to do the same with DeSoto.

“It was fun because in my sophomore year we weren’t so good but in my junior year, we came out and dominated doing the unexpected. So that year was fun, going to miss all those guys,” Bradley explained.

“My work ethic, I feel like I need to work twice as much as everyone else in order to be on top,” Bradley said on what leads to his success.

Bradley, in February, decided to end his recruitment by committing to Texas Tech for the class of 2021. Bradley via the 247Sports Composite is the second-highest rated commit for the Red Raiders. The four-star wide receiver is ranked as the 56th best at his position and the 48th ranked player overall in the state of Texas. He joins another Elite 11 finalist, Behren Morton, as the other four-star commit for the Red Raiders in 2021.

“What led to me committing was the family feel. I felt that Coach Wells did a great job in recruiting me and being the first to actually recruit me had a lot to do with my decision,” Bradley explained.

Bradley looks to continue all of his success with DeSoto in 6A Texas football. DeSoto last year finished 9-3 losing in the area round of the 6A D1 state playoffs. They lost to rival Cedar Hill, by one point to finish second in the district.

Bradley hopes that with him apart of their offense, it leads to more success for him and DeSoto in 2020.

“The goal for Desoto is to win the 6A State Championship,” Bradley said.

DeSoto has a crazy high level of competition this upcoming season. That being said, they now have one of the best weapons in the state of Texas. If anyone can elevate them and push them over the edge, it’s Jerand Bradley, future Texas Tech star.

Marcus will take on the Waxahachie Indians in their home opener