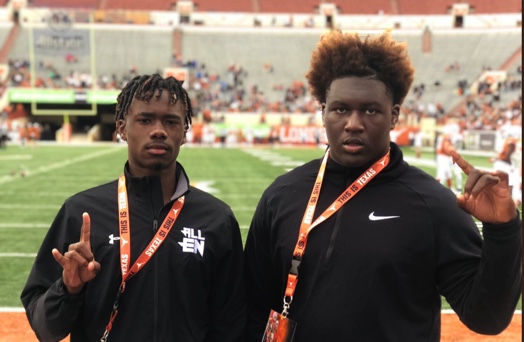 To say Kam Dewberry had a busy weekend would be selling him short.

The 2022 offensive tackle was in Houston for their spring game Friday night, a visit he described as good, but unfortunately, was dampened by rain.

The Atascocita product then made his way to Baylor Saturday morning for their spring game, marking his second visit to Waco.

Overall, he was impressed with the visit and lauded the progress being made under head coach Matt Rhule in his third year. Dewberry was also on hand for the Bears’ uniform reveal, though he admitted that while the new ones look nice, he prefers the old ones.

Dewberry then made his way down to Austin to see the Longhorns’ spring game Saturday evening.

“It was good, all the people and families, there’s a lot of love down there.” Dewberry said. “Everybody’s family and it’s just a good atmosphere out there”

Dewberry has yet to receive an offer from Texas, but with offensive line coach Herb Hand making his way into Atascocita for spring ball, Dewberry’s hoping an offer will be coming soon. He went on to state that the UT offer is the main one he’s waiting on at the moment.

He does hold a Texas A&M offer though, and visited the Aggies last week. It’s been tough to compare the two schools especially this early in the process but he’s noticed some differences.

A big selling point for the Aggies is his former teammate Kenyon Green, a five-star tackle in the class of 2019. Dewberry admitted Green is working hard to get him to College Station, even though his decision is still years away.

With four offers to his name, and more on the way, Dewberry is in no rush to make a decision. He plans to commit the summer before his senior season.

With spring practices starting soon, the freshman has goals in mind of what he wants to achieve before his sophomore year.

“To get my feet quicker and get bigger, stronger, faster and just try make myself the best player I can be going into this next season”

Atascocita is coming off an 11-2 season that ended in the Regional round of the playoffs. With most of their offensive stars returning, another deep playoff run should be expected out of the Eagles. For Dewberry, if his freshman season was any indication of things to come, Atascocita could see themselves producing two five-star offensive lineman in four years.

Keith Miller opens up on commitment to Kansas