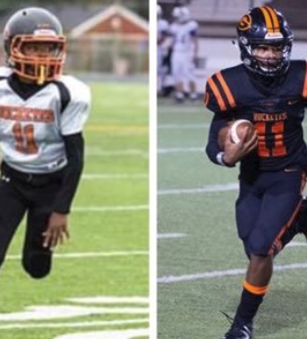 “With everything going on we’re thankful that we’re able to be playing the game that we love together,” quarterback Brandon Tennison said.

Tennison was a monster on the football field Friday night as in the win, he completed 15 of his 20 passes for 277 yards and three touchdowns.

Tennison though gives all the credit to his teammates.

“Without the offensive line blocking and the receivers catching the ball none of that would’ve even been possible,” he said.

Gilmer is coming off of a wildly successful 2019 in which they went 11-3. Their three losses though only came to state champions. They lost by nine early in the season to eventual 4A D1 champions Carthage. Then, they fell in the regular season and in the playoffs to district rival and 4A D2 state champions, Pleasant Grove.

Gilmer is easily one of the most impressive teams in all of 4A and on Friday, they got their season off to a nice start. Gilmer returns only half of their starters from the year prior, but they should still be able to light it up offensively against anyone.

If they want to knock off Pleasant Grove who has one of the best defensive lines in Texas, Tennison will need to continue ball out. If Friday is any indication, he unquestionably can.

“You can expect us to get better every week and just keep grinding,” Tennison said.