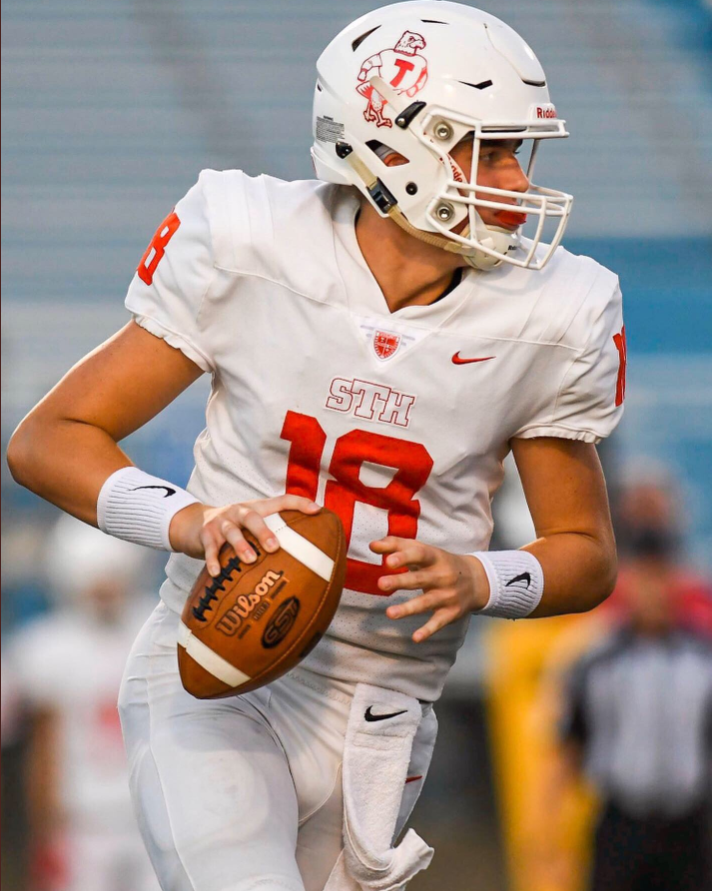 No matter where you go in Texas you’ll find high levels of talent, especially at the quarterback position. Recently, seven Texas High School quarterbacks were named to the 20 man field elite 11 finals.

One of those was St. Thomas’ stud, Maddox Kopp.

Maddox Kopp as a quarterback is extremely underrated. Most quarterbacks who made the elite 11, sit at the top of the 247Sports Composite rankings. Kopp doesn’t even have a ranking via that Composite. He’s listed as a three-star prospect via 247Sports sitting at an 85.

Kopp, immediately on night one of the finals, showed why he belongs. In the opening challenge, the rail shot challenge, it came down to eventual Elite 11 MVP Caleb Williams, now Ohio State quarterback Justin Fields, and Kopp. After the competition went into triple overtime, Kopp came out on top. What a showing.

“The call competition is something that made the camp really fun. Being named a finalist was a true honor and a dream come true,” Kopp said.

While Kopp didn’t make the final Elite 11 which was comprised of 50% junior season film and 50% camp evaluation via Elite 11’s twitter account. Kopp still, was one of the most impressive performers of the three-day camp. Kopp will be shooting up these rankings in no time.

“My first love was basketball,” Kopp said. “But, when I hit high school I fell in love with the position and everything it had to offer, the good and the bad.”

Kopp has the size to success at any level at 6’5 and 210-pounds. He plays for St. Thomas in Houston which is apart of TAPPS in Houston. As a junior, Kopp threw for 3,089 yards and 28 touchdowns as St. Thomas won nine games and made it to the TAPPS Division 1 state semifinals.

He was named to the second-team all-state team. Since the Elite 11 announcement, Kopp has been hot on the recruiting trail receiving offers from Wyoming, Texas State, Tulane, and Houston recently. Expect a lot more to be coming in.

“Something that leads to my success is being able to realize that I would not be here without people willing to help me,” Kopp explained.

Maddox Kopp has shot up into the eyes of the nation. A big strong quarterback who’s already a stud and still has loads of room to grow. He and St. Thomas ended up falling to powerhouse Episcopal in the state semifinals by 20 points. Kopp looks to carry this momentum to get over the hump with St. Thomas in 2020.

“The goal for my senior season is to bring a state championship to St. Thomas high school. Something that is very possible,” Kopp said.

Maddox Kopp is a name everyone should remember. A guy who has made the most of this opportunity as an Elite 11 finalist and every opportunity given to him. Anyone who beats Caleb Williams and Justin Fields in any competition is someone to keep your eyes on. Kopp isn’t just that though. He’s legitimately one of the best quarterbacks that the state of Texas has to offer.

“The fans should know that I love to interact with y’all. At this point in my recruitment, I have realized that the game of football brings you relationships and memories that will last a lifetime,” Kopp said.