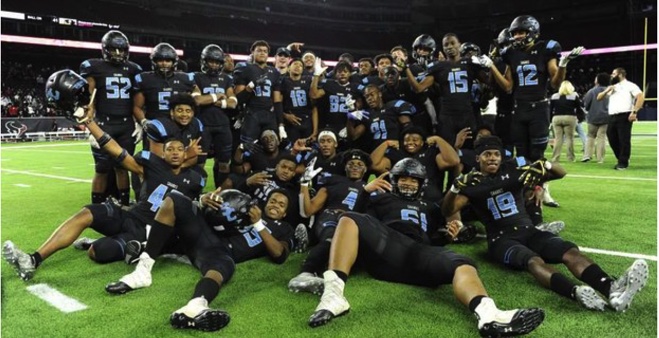 Another player from Shadow Creek’s impeccable championship team has announced the end of his recruitment. This time, it’s three-star defensive tackle Ryan Williams. He announced via his twitter that he will be committing to Colorado.

“Just the family environment and the coaches showing me love and appreciation every week and checking up on the family and me,” Williams said.

Williams received offers from Colorado and Texas Southern but ultimately chose to go with the Buffaloes. Williams is a three-star commit via the 247Sports Composite. He ranks as the 101st defensive tackle for his class in the nation as well as the 251st player overall in the state of Texas for 2021.

Williams in nine games for the Shadow Creek Sharks last year recorded 19 tackles with five for a loss.

“My hard work ethic and the people around me,” Williams said on what leads to his success.

Shadow Creek has a ridiculous 31-1 record as a varsity program. After two seasons at the 5A D1 level, they move on up to 6A for their third year. Williams remains confident in his and his teams’ expectations for year three.

“State championship, and to be better than last year’s team,” he said.

Colorado in Williams is getting a 6’5 260-pound playmaking defensive lineman. He becomes the ninth hard commit for the Buffaloes 2021 class. He joins guard Jackson Anderson (Mineola) as the second Texan in this class as well.

“I’m a  cool person to be around and I can’t wait to see what Boulder, Colorado is like,” Williams said.

As for what it’s like being a state champion?

“It feels great and all but we trying to win another and be back to back state champions,” Williams said.

Reacting to the UIL’s Decision to Delay 6A & 5A Football