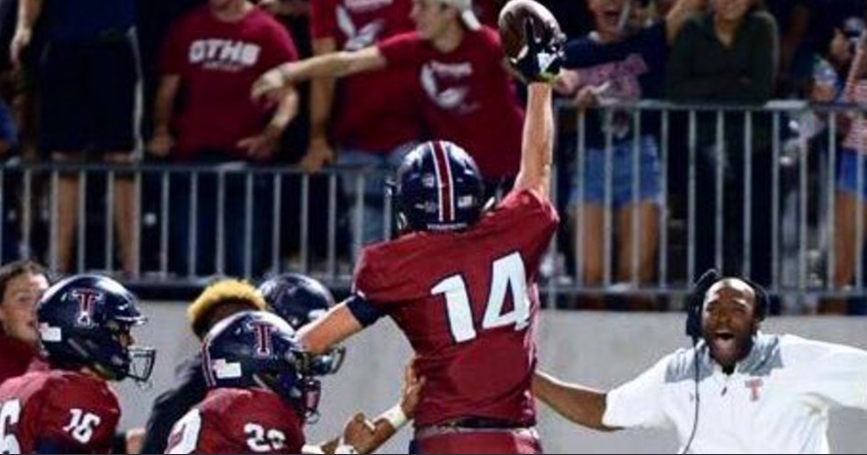 “Over the past few months, I’ve gotten the chance to talk to a few coaches on a weekly basis including the head coach, Coach Stig. Showing they truly care about me. I spent time researching and talking to players and all of what I heard I loved. So before my senior season took off I wanted to commit,” Huerter said.

John Stiegelmeier has been the Jackrabbits head coach since 1997, boasting an impressive 164-105 record there.

Last year, the Jackrabbits let up on average 16.7 points per game. Stiegelmeier is getting an absolute game-changer on defense with Tompkins’ Huerter.

Huerter is a 6’0 180-pound safety who’s been a ball-hawk for the past two seasons. As a sophomore, he recorded 63 tackles, two for a loss, and an absurd nine interceptions. He was voted to the TWSA Class 6A first-team All-state team for his efforts. As a junior, he put up 97 tackles, four for a loss, with eight passes broken up, a forced fumble, and an interception.

“My success is earned from waking up every day and working out with my team, pushing myself and competing with others. Studying the game and growing my knowledge of football,” Huerter said.

Katy Tompkins after an impressive 11-2 season and back-to-back trips to the regional semifinals have an uphill battle in 2020. They return star quarterback Jalen Milroe, but that’s essentially it on offense as most of the offense including the offensive line will be a brand new cast of characters. On defense, they return six starters most notably Huerter. He looks forward to his final year balling out for Katy Tompkins.

“My goal this upcoming season is to enjoy one last ride with the guys I’ve grown up with, while also being named All-State defensive back for the third time in my high school career,” he said.

Huerter is one of the most underrated talents in the state of Texas, a guy who should’ve been on a lot more universities radar. Nonetheless, he’s going to show everyone in Texas this year, and all of the FCS for years to come what they’re missing out on.

“Fans should know that I’ll be a leader at all times and in any situation. I outwork everyone and will always have a smile on my face doing it. I love football for the team aspect and the family it creates. I can’t wait to be a Jackrabbit.”