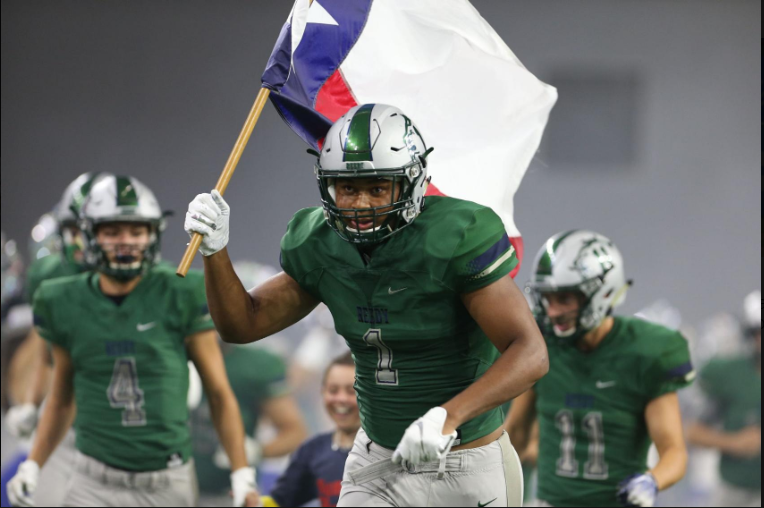 It’s the Texas State 5A Division II quarterfinals. Powerhouse of the decade Aledo High School is going up against Reedy High, a small known school who’s only been around for three years. This is a true David vs. Goliath. It’s reminiscent of the 2018 Stanley Cup finals, the star-studded Washington Capitals vs the expansion Vegas Golden Knights. Just like the Golden Knights, from an outsider’s perspective, Reedy shouldn’t have been there.

Yet there they were.

The Lions have an opportunity of a lifetime to dethrone the kings of the Lone Star State and cement themselves as a new football powerhouse. Just like the Golden Knights though, Reedy would indeed, fall just short.

I mean, did you really think they would take down a team who at the time had won six state titles in the span of nine years?

This isn’t Hollywood with a magical script, it’s football.

However, Reedy High didn’t just lose, they only lost by only ten points. That’s right, they lost by only ten points to a team who was winning games by an average of more than 36 points. What if I told you that they held Aledo to only 26 points, Aledo’s lowest scoring mark of the whole year. Well, then I would also tell you that the future looks blindingly bright for the Reedy High Lions.

The year is 2015, Frisco, Texas is one of the fastest growing cities in all of the United States. Families from all over are coming down to the North Dallas area to what many people refer to as “The Best place to Live.”

Frisco has held that moniker for a few years now due to the outstanding education system, job growth and no state income tax to name a few. Frisco is growing so rapidly that they have no choice but to build more schools to accommodate the multitude of students. So, Rick Reedy High School is born, less than three miles away from Frisco High and 1.5 miles from Legacy Christian Academy.

Once Reedy High school got off the ground and became Frisco ISD’s 8th high school, planning quickly took place to launch a varsity football program and thus the search for a coach began. Reedy was able to lure Chad Cole, who at the time was the offensive coordinator at Wakeland, to be its inaugural head coach.

Cole had been an assistant at Wakeland for the past nine years and in his final season led the Wolverines to the playoffs with his offense averaging around 35 points a contest. Reedy, from the get-go, had put the pieces in place to be a Texas sized force of nature early.

In its first year as a football program, Reedy High finished 3-7.

It was a rough season all around for the Lions. Sophomore quarterback Josh Foskey averaged 115 yards a game while throwing five touchdowns to nine interceptions. Their leading receiver, sophomore Bennett Mecom, had only 21 catches. The defense wasn’t much better as they only totaled 10 sacks for the entire season. The one bright spot was running back Justin Gipson who, as a junior, ran for more than 1000 yards on just over 200 carries with 13 touchdowns.

This all, coupled with the horrible record and scoring less than 200 points for the season, doesn’t look good… at all. But, notice the players that were named were all sophomores and juniors. In fact, taking a look at the 2016 Reedy roster as a whole, they didn’t play a single senior. They trotted out a group of 15-17 year olds to compete against Division One bound Texas freak of nature athletes. It’s a miracle they even won three games.

The first season for Reedy was about getting acclimated to varsity level football.

One year later, bringing out the same cast of characters, Reedy High finished 9-2 including a playoff berth.

They increased their scoring as a team by more than double, going from 196 points scored to upwards of 400. They beat Frisco High by 28. Princeton by 28. Chad Cole even got revenge on Wakeland, with a seven point victory. Quarterback Josh Foskey went from averaging 115 yards a game to almost 250. With a touchdown to interception ratio of 24:4. Gipson’s carries remained about the same, except he had 200 more yards with seven more touchdowns. As a sophomore Will Harbour had over 100 tackles while junior Matthew Hoots gave opposing quarterbacks nightmares with 11 sacks on the season. A three point loss to Lake Dallas in the opening round of the playoffs might’ve left a sour taste in the mouths of the Reedy faithful, the future was already bright. They went from the 641st ranked program in Texas to cracking the top 200 in one season.

If the Reedy High Lions were a rollercoaster, that attraction would be about 20 seconds in with the ride still going upwards with plenty of track in sight.

In its third season, Reedy not only made it to the quarterfinals of the State playoffs, but had a perfect regular season finishing 13-1, along with their first ever district title. They wrecked opponents left and right, averaging 41 points a game while only allowing a hair more than 15 points defensively.

Yes, a team who was so atrociously awful just two season ago was now bullying teams down and winning by almost four touchdowns a game. These lions were in the savannah, hungry and starving for blood, and were treating their opponents as tiny gazelles who were nothing more than bags of skin to them. They were at the top of their game and looking back, it’s easy to see why.

While many others across the state are shining at the JV and freshman level, Reedy’s players were getting varsity reps. They struggled in year one, but it allowed them to get a feel for the game much quicker than most kids. Josh Foskey again had more then 20 touchdowns with less than 10 picks, this time, with 500 yards rushing as well. Justin Gipson was gone, but senior Michael Ferrara picked up the load with 1.385 yards and 22 touchdowns. Bennett Mecom had now blossomed into a near 1,000 yard receiving threat. 3 players had over 80 tackles with Will Harbour again leading the way now with 129. The defense was also getting to the quarterback an average of 3 times a game as a team. Reedy was unstoppable, as their closest win the whole season was still a 2 possession game.

It all ended however, on December 8th at the Northwest ISD Stadium when they ran into a freight train named Aledo. The season was over but what the 2018 Reedy Lions had done, was beyond immaculate.

All of that leads into the offseason and preparations for the 2019 season.

A lot of the core that has been around for the past few years are now gone and you may be wondering well who’s going to step up now?

The whole reason that they’ve been so good for the past few years is that they’ve kept the same nucleus together and have built the chemistry necessary to succeed right? While that may be true, they did so while giving good reps to sophomores and juniors that were succeeding on the JV level.

The junior varsity team finished 8-1-1 and while the varsity team was blowing out opponents by the 3rd quarter, they needed players to step up late to allow the normal starters to rest up and not get seriously injured. This tactic made way for sophomores such as defensive lineman Hudson Halbert and defensive end Brooks Griffiths, among others, to get to sit on the sideline and experience the varsity atmosphere first hand and also allowed them to get some reps against elite competition.

Hudson Halbert will be a junior next season and may be the best kept secret in all of the DFW area. Playing football is hard enough, yet for most of the junior varsity season, Halbert played snaps at both offensive line and defensive line. Through his play, Halbert perfectly displayed what it takes to make it when it comes to Texas athletics.

To go along with being a freak of nature on the field, Halbert is also a member of the Reedy Track and field program as well as the Weightlifting team, which he went to state for. Hudson finished the state meet with an absurd squat, bench press and deadlift total of 1470, good enough for 16th place in the 220 pound weight group.

“Our main expectation for this season is only to be the best we can possibly be through putting in as much work as we possibly can in this off-season and spring ball.”

” [It] taught me a lot…I learned truly how much goes into this program and how hard everyone works to lead to success.”

Although Hudson has had a plethora of on and off field success, he lets his hard work and talent speak for itself. He doesn’t need to brag, he’ll show you just how good he is week in and week out as when asked what can be expected of him next season, “You’ll have to wait and see.”

Rick Reedy High School has been on an incredible journey since its inception in 2015. 3 seasons of varsity football, each season being better than the last. They have already shown themselves to be the best of the best in Frisco as reigning division champions, and being the only legitimate threat to ending Aledo’s reign.

While many believe that 2018 might’ve been the peak for Reedy football, there’s a lot of evidence that suggests that they can be on top for years to come. The foundation is in place, the culture is defined, no matter how many more students move to Frisco, Texas, if they attend Reedy they will know via fellow Lions what it takes to strap on green and gray every Friday night. Through reigning district MVP and senior star, Will Harbour, rising stars like Halbert, or Jack Jamison and even transfer such as quarterback Jalen Kitna, the blueprint is there for future Lions success.

Will this squad be the one to breakthrough the threshold and win it all? Well, in the words of Hudson Halbert

“You’ll have to wait and see.”