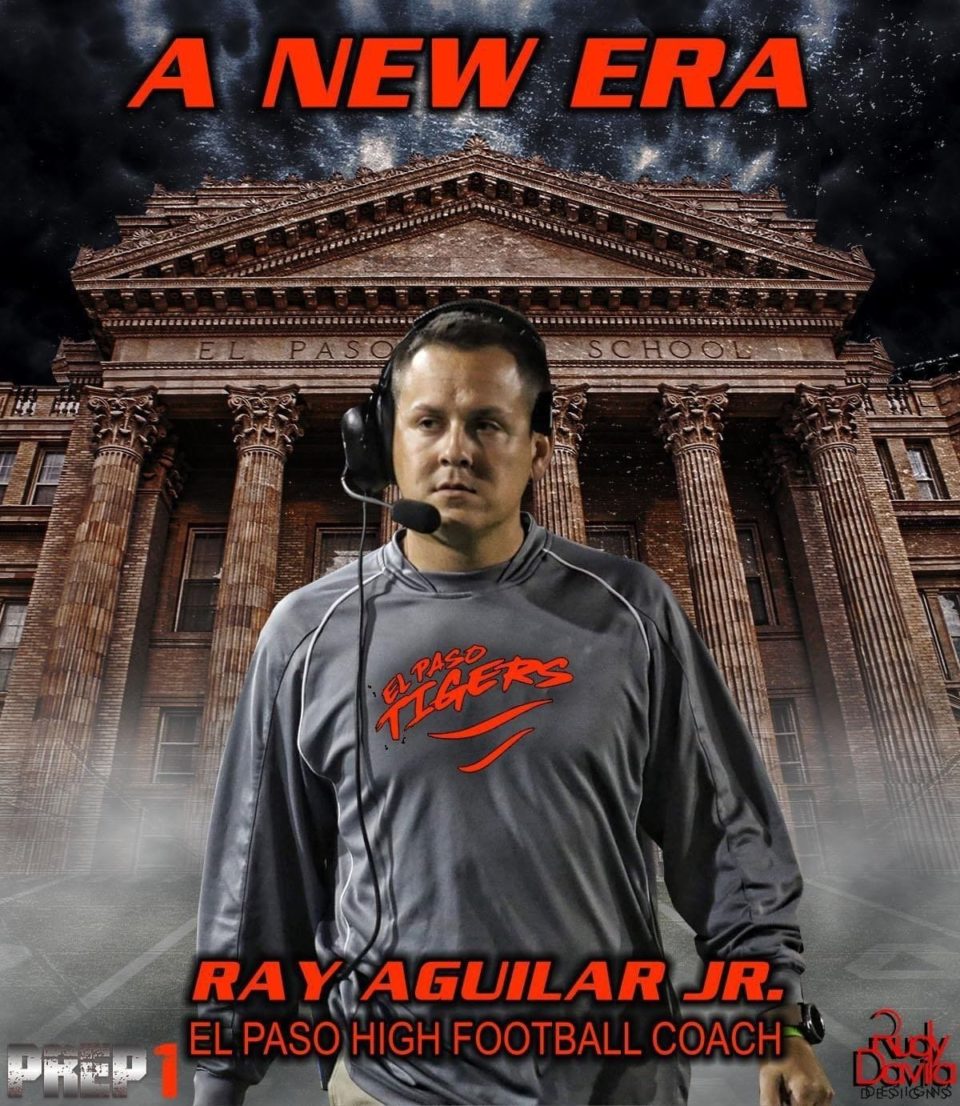 Ray Aguilar has stepped down as head coach of the San Elizario Eagles and has taken over as Head Coach and Athletic Coordinator at El Paso High School.

After taking over a winless San Eli program back in 2018 and making them winners, Aguilar will try to work the same magic at El Paso High who also went winless this past season.

Ryan Vidales and Tristan Larsen of Prep1, TheOldCoach.com‘s West Texas partner, spoke with Aguilar soon after he accepted the position.

Larsen – The year before your arrival at San Elizario that program went winless, what was the big reason for your team’s turnaround when you became head coach?

Aguilar – Culture. We spent a lot of time instilling the “Dig In” culture and the idea of being ELITE with the kids and they bought in 100%. The seniors in 2018-2019 were hungry to be the class that got San Elizario Football back on the map and they did an ELITE job.

Larsen – What led you to El Paso high school? What about the position enticed you?

Aguilar – The pride and tradition of El Paso High was undoubtedly something that enticed me to apply for the position. My mother’s side of the family are all former Tigers so I know what that is all about. It’s definitely something that I am very excited about being a part of.

Larsen – El Paso hasn’t had a winning season since 2016 what are you going to implement to try and ensure a turnaround?

Aguilar – The Dig In Culture. Everyone at El Paso High is hungry to get the football program back on the right path. Dig In is all about creating an exciting and engaging environment were student-athletes strive to be ELITE academically, athletically, and socially.

Aguilar – Working with kids. I got into coaching to create ELITE young men of character. My goal as a coach is to see my former athletes in 10-20 years at the grocery store or wherever and find out they have become ELITE husbands, fathers, and community leaders. That’s when I’ll know I did a great job as a coach.

Larsen – What are your expectations for year 1?

Aguilar – I fully expect our program to have a 100% academic retention rate. I expect our players to step up and become leaders in the school. If we take care of those things we will be successful on the field.

Vidales – How do you plan to treat this off-season and summer with everything going on with COVID-19.

Aguilar – I am personally going to treat this off-season and summer as I normally would but instead of handling meetings and practice in person, we all have to take advantage of video conferencing. It’s definitely a challenge but I really enjoy taking on a new challenge. The Texas High School Coaches Association has also done a great job connecting with coaches during this time to help us tackle some of the challenges we are facing and providing us with content to share with our kids.

Vidales – Do you have any core values that you like to implement as a coach if so, what are they and why these values?

Aguilar – Our core values are the ELITE Core Values. Energy, Love, Integrity, Toughness, and Effort. These core values create a strong foundation for our program and are a priority in everything we do.

Vidales – Who’s returning from last season’s EPHS team that you expect to make an impact this upcoming season?

Aguilar – I will not spend time evaluating film from the previous season. The kids know this is a fresh start and an opportunity for them to prove themselves through a new set of eyes. It also gives them the opportunity to change for the better if they previously had some bad habits.

Vidales – What kind of offense and defense do you plan to bring to EPHS?

Aguilar – We are going to run what puts our kids in the best position to be successful. Hopefully, we will get an opportunity to start meeting the kids in person sometime in the summer to start evaluating them.

Vidales – What are your expectations for your first battle of the claw rivalry against Austin?

Aguilar – I can’t wait!!! I have a lot of respect for Coach Pichardo and everything he has accomplished, but I have heard nothing but “Beat Austin” since taking this job so it’s already been ingrained in my brain. GO TIGERS!

Vidales – What are your opinions of your new district and the level of competition you will be facing in opposing teams.

Aguilar – This is a fun district. Not only are you playing some of the most historic programs in town on a weekly basis but you are also competing against some of the best coaches and programs in El Paso.

Vidales – Who are your non-district opponents, how well do you think they will prepare you for the district?

Aguilar – Next year we are excited to be apart of the “Flagship Bowl” between Socorro ISD’s flagship Socorro HS, Ysleta’s flagship Ysleta HS, and us the flagship of El Paso ISD. We also play Clint and Riverside.

Vidales – Have you received support, from the community and boosters once your hiring was announced?

Vidales – How was the response from your players after meeting you for the first time, and describe how it was to meet the team through video call as opposed to traditional face to face?

Aguilar – I was just thankful to have the opportunity to meet the kids. The response has been ELITE! The kids are hungry to win and get the program back on top.

Vidales – Who have been your biggest influences when it comes to coaching, any coaches or people you enjoy learning from?

Aguilar – I’ve had so many great mentors and different coaches that I’ve had the privilege to work with, but my biggest influences have been my father (Ray Aguilar Sr.), grandfather (Manny Aguilar), and uncle (Rene Aguilar). Growing up a coach’s kid, grandkid, and nephew and having the opportunity to be around their great football programs was an experience unlike any other.

Vidales – Tell us about this #digin philosophy that we have been seeing all over social media, what kind of culture is this?

Aguilar – Dig In is Dig In. It’s hard to understand unless you are apart of our program and that’s the way we like it. The basic idea and purpose of Dig In are that we prepare our student-athletes to be ELITE academically, athletically, and socially.

Vidales – What is your favorite team meal?

Vidales – Finally tell us how does it feel to call what many say is the best high school football stadium in the country, your home field?

Aguilar – R. R. Jones Stadium is the best football stadium in the country. You really don’t understand how incredible it is until you go to a game and take it all in. I am blessed to have the opportunity to be the Head Football Coach at El Paso High and call this beautiful stadium home.

Vidales – Any closing words or a statement for Prep1?

Aguilar – I’m calling on all the alumni, community, staff, students, and just El Paso High Tiger fans to fill the stadium for Tiger Tour 2020. These kids are working incredibly hard to make you proud and supporting the program any way you can will make it that much more special for them. DIG IN! GO TIGERS!