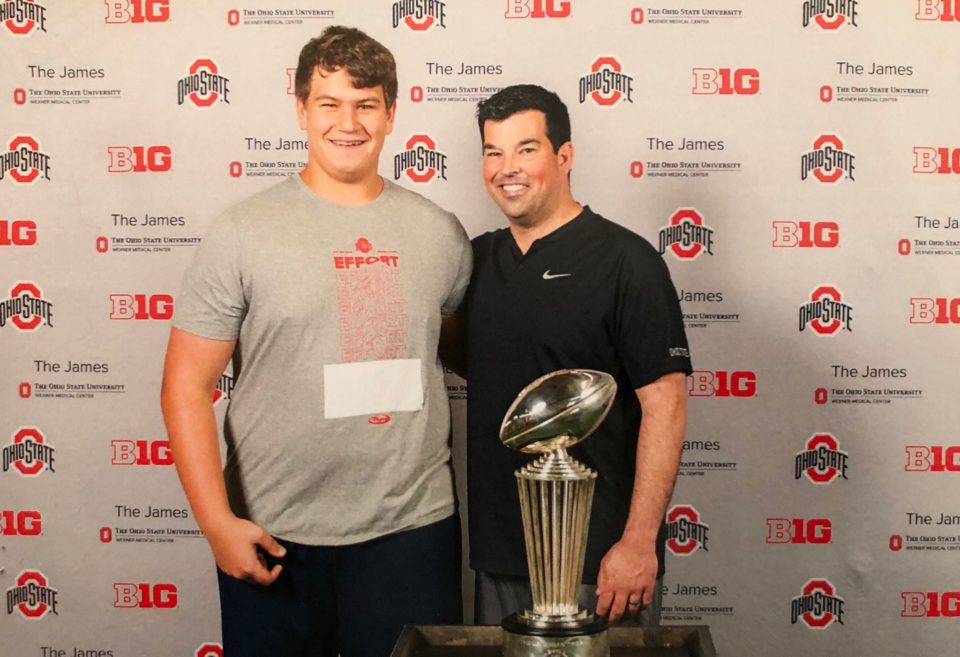 Caleb Rodkey visited this week to take part in Ohio States camp. During the camp Offensive Line Coach Greg Studrawa stated that Caleb seperated from the group of linemen participating while frequently stopped the drills to have Caleb show the rest the correct technique. He has since stated he has a great relationship with Coach Studrawa and developing one with Coach Day.

Caleb followed it up with saying he loved the campus tour which included a look at the all black jerseys and the Heisman trophy. He had a chance to sit down with the coaches and talk about his fit within the team.

Caleb had an outstanding 2018 campaign winning the Newcomer of the Year within 20-6A and First Team All-District with the Ridge Point Panthers. He currently stands at 6’5″ 320Lbs and works with Live From The Trenches. Caleb is starting for Ridge Point this year and plays both Tackle and Guard.

I also got to catch up with Cam Stone who recently picked up offers from Sam Houston, Houston Baptist and Midwestern State.

Stone has impressed this offseason. He took part in the SFA camp where he won DB MVP. He also had a strong showing at the Sam Houston camp where he praised the strong competition.

On what he expects from the upcoming season, Stone replied

“I’m going to take what i have learned at the camps and my new role as leader of the team to lead them to the best season possible.”

Stone is hoping for gold this year with Angleton High School.

Churchill Williams V otherwise known as C5 is another safety that has impressed this offseason. He is a 5’10” safety out of Stafford High School where he has dominated silently.

Williams has had a standout offseason for ALL-EN 7v7 this year and will pick up more recognition as he gets some well deserved offers.

He visited Texas a few months ago where he said he has a special connection with the coaches and even got a selfie with Matthew McConaughey.