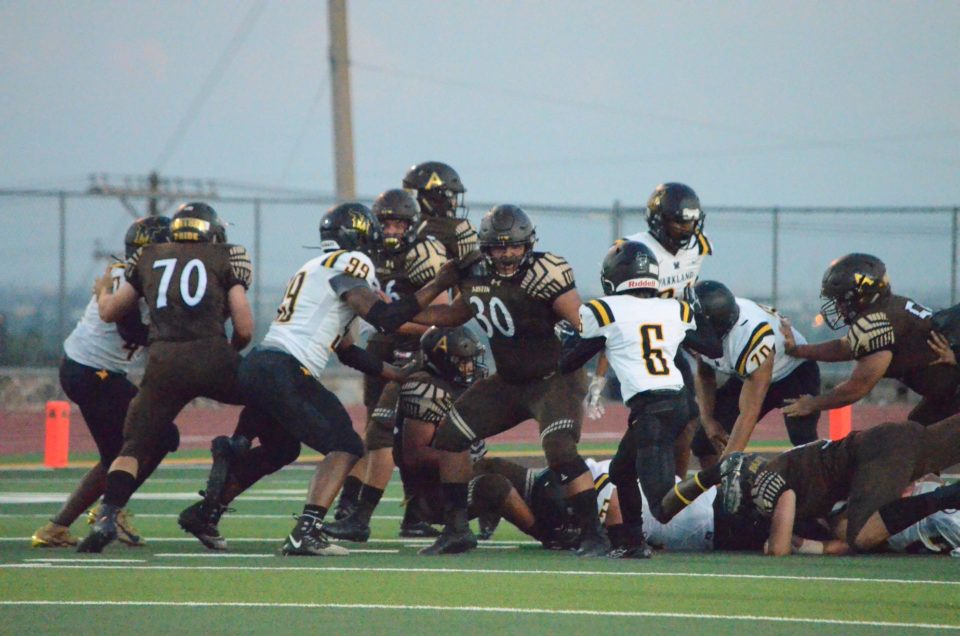 The Austin Panthers got things started with a strong ground attack by Running Back Isiah Witterstauter on the opening drive of the game.

That moment quickly came to an end when Witterstauter left the game with what looked to be a knee injury.

The Parkland Matadors would take over on downs and light up the scoreboard with their quick-paced no-huddle offense, QB Gabriel Herrera connected with WR Dwayne Ford on a 74-yard touchdown strike.

After that, the Matadors continued their air raid attack when Herrera found WR Donta Hayes in the back of the end zone for a 43-yard touchdown.

Later Herrera would call his own number on a 4-yard QB keeper to put the Matadors up at the half 21 to 0.

Coach Eric Pichardo’s Panthers would come out inspired in the 2nd half playing shut down defense.

Austins Will Hernandez spearheaded the Panther’s ground attack driving the Pathers down to 1-yard line.

QB Daniel Orozco would find paydirt off a QB sneak.

The Matadors were only able to score 3 points in the 3rd quarter holding onto a 24 to 7 lead.

The Matador’s next drive stalled and on the ensuing panther possession QB Ceaser Mireles found WR Elijah Velasquez in the back of the endzone for a 38-yard touchdown strike.

After that, the Panther defense came up big as they forced a fumble and returned it down to the Matador 5-yard line.

Luis Rangel bruised his way into the endzone on a 5-yard scamper and on the next play QB Ceaser Mireles would run in the 2 point conversion putting the Pathers within 3 points.

The Panther’s defense would hold on the ensuing possession giving them one last chance to win the ball game.

The Matador defense would come away with a huge 4th down stop after the Panthers failed to convert on a trick play.

Parkland would come out in victory formation and the Austin comeback would fall short as Parkland takes this one 24-21.

Parklands Gabriel Herrera went 15 for 26 for 258 yards and 2 touchdowns, Donta Hayes rung in 8 receptions for 136 yards and a touchdown. Austin’s Will Hernandez would lead all rushers with 26 carries for 168 yards.

2-0 Parkland will play EP Jefferson next week and 1-1 Austin will take on Socorro.