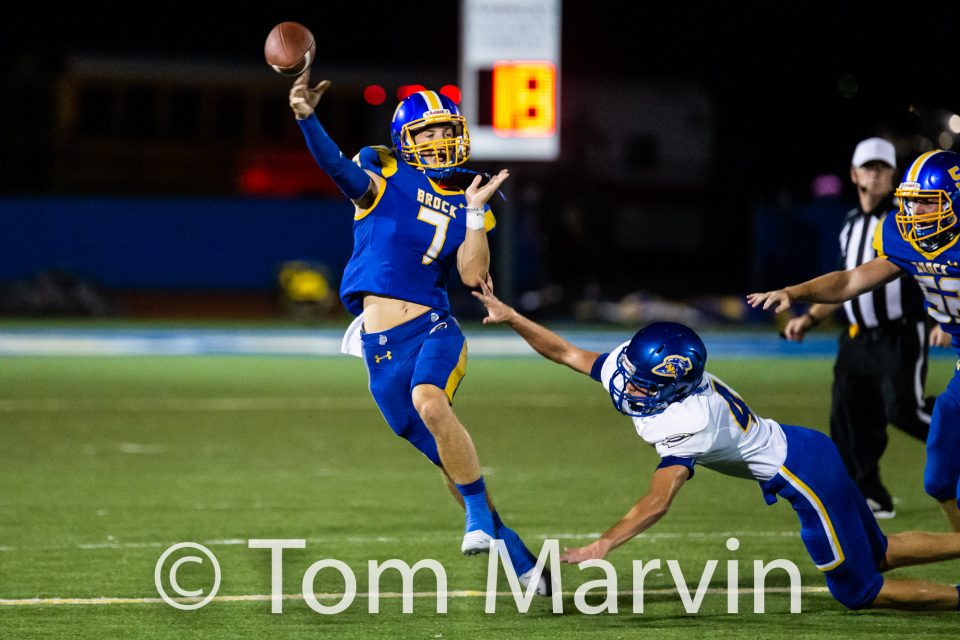 Quarterback Jaxon Gleaton threw three touchdown passes and Chris Palfreeman scored on a 63-yard run, an 20-yard reception and a 75 yard interception to lead the Brock Eagles to a 66-7 victory over Nevada Community.

The Brock defense forced six turnovers in the game, three recovered fumbles and three interceptions. The defense also scored it foced the Braves into two safeties.

Cash Jones, who led the Brock rushing attack with 170 yards, scored on a 14 yard run, had a 23-yard TD reception, and he threw a two-point conversion pass.

The Eagles led just 2-0 after one quarter as they were slowed by turnovers and penalties. However, Brock exploded for 65 points over the final three quarters and rolled to 535 total yards.

The offensive onslaught began when Brock (2-0) scored 28 points over the final 8:24 of the first half.

Myles Semas got Brock’s first touchdown with his 39-yard run.

Jones, who had one long touchdown run called back by a penalty, got his TD run by jumping over one defender, spinning out of another tackle attempt then running to the left side for a 14-yard score with 1:53 left in the half.

Brock got the ball right back when Tyler Moody interception a deflected pass to give Brock the ball at the 37-yard line.

On first down, Gleaton rolled right and tucked the ball into Palfreeman from behind as he went past. Gleaton continued to roll right and Palfreeman froze for a few seconds before taking off the the left sideline and outracing the defenders for a 62-yard TD run.

Palfreeman got Brock’s next score with a 20-yard pass from Gleaton early in the third quarter, then he closed the scoring with his 70-yard interception return with 1:56 left in the game.

B – Nevada Community recovers their own fumble in the end zone for a safety.

B – Nevada Community punter recovers high snap in end zone for a safety.