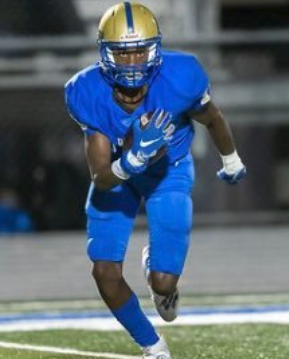 Rockdale has won multiple state championships, one in 1976 and one as recently as 2017.

Last year after an 8-2 season, they, unfortunately, met eventual state-champion Grandview in the first round of the 3A D1 playoffs. In 2020, the Tigers are looking to climb to the apex again.

That journey has started with a 2-0 start to the new season. A 40-14 season-opening win over La Grange parlayed with a 55-21 victory over Taylor last night.

Rockdale has a powerful rushing attack led by star Cam’Ron Valdez but last night the hero of the day was a wide receiver, Anthony Dansby.

“It’s always great to have great games and come out with a with but we couldn’t and I couldn’t do it without the support of my teams we play as one to be number one,” Dansby explained.

Dansby was humiliating defenders all night as he embarrassed Taylor defenders to the tune of six catches for 159 yards and three touchdowns.

Quarterback Kobe Mitchell completed 17 of his 18 passes for 295 yards and five touchdowns in the blowout as well.

Dansby now has seven catches for 189 yards and three touchdowns this season for Rockdale.

“It’s a great feeling going out there with my brothers and getting two wins for not just ourselves, but our community,” Dansby said.

Rockdale is a bonafide top-ten team in 3A, and a favorite to win their district in 2020. With performances like Dansby, it’s clear to see why.

Dansby last season for Rockdale caught 27 passes for 443 yards and six touchdowns. He’s easily on pace as of this moment to surpass all of those marks.

“Expect us to play in December in Jerry’s World, nothing less. When you get to that game you’ll see the show we’re gonna put on,” Dansby said.

Dansby and the Tigers of Rockdale have their toughest test in week three as they face the also 2-0 Lexington Eagles who are coming off of a 35-6 win themselves.

Dansby is confident though and wants fans of his and Rockdale to know a few simple things.

“To the fans out there just know this is only the beginning. Go Tigers!”