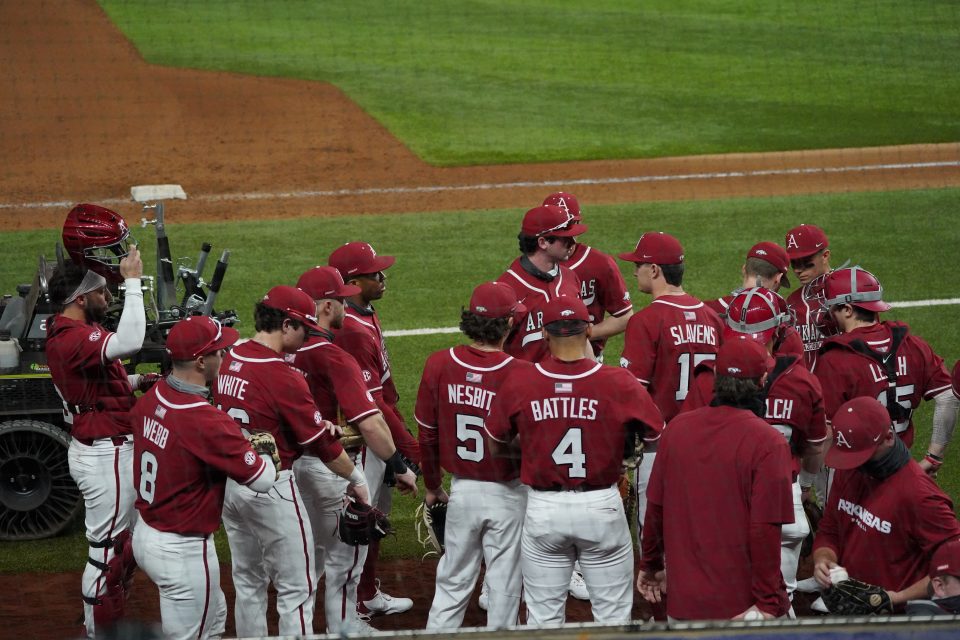 ARLINGTON, TEXAS- It seems as though Arkansas baseball may have found a second home in Arlington, Texas. Designated Hitter Brady Slavens hit a three run home run to right-center in the bottom of the sixth inning to break open the Arkansas lead from one run to three and ultimately was a deciding factor in the 4-0 win over Texas at the State Farm College Baseball Showdown at Globe Life Field.

Slavens brought in all four of the teams runs in the game tonight. A game that started off slowly, Arkansas did not get their first hit of the game until the fourth inning of the game. All it took was one opportunity for the team to get going, as Slavens started the scoring by a single that brought home Braydon Webb. While the team had less than double digit hits, they took advantage of the opportunities given to them. The Arkansas pitching staff did the rest of the work to keep this game out of reach.

Starting pitcher Peyton Pallette went four and one third innings shut out ball while only allowing one hit and striking out eight Longhorns. While the bullpen was called early for the Razorbacks Lefty Caden Monke and Righty Caleb Bolden were up to the challenge. Monke kept the Longhorns from scoring after reliving Pallette, while Bolden (A Texas native) played the role of the long reliever in the game. Bolden finished the night with four innings pitched and seven strikeouts and the save. One of the more impressive stat lines in the game for the Razorbacks is the fact they only ONE Texas hitter was able to register a hit tonight, with Murphy Stehly getting both of the teams hits in the game.

Arkansas has now guaranteed themselves a winning record out of this weekend tournament, while Texas will head back to Austin at a minimum with two losses to their name. Arkansas will play TCU on Monday Feb 22 at 6 p.m. While Texas will play Ole Miss at 2:30 p.m. on Monday. With this win the SEC continues to flex its muscles in Big 12 country, as the conference has only dropped one of the six games so far.