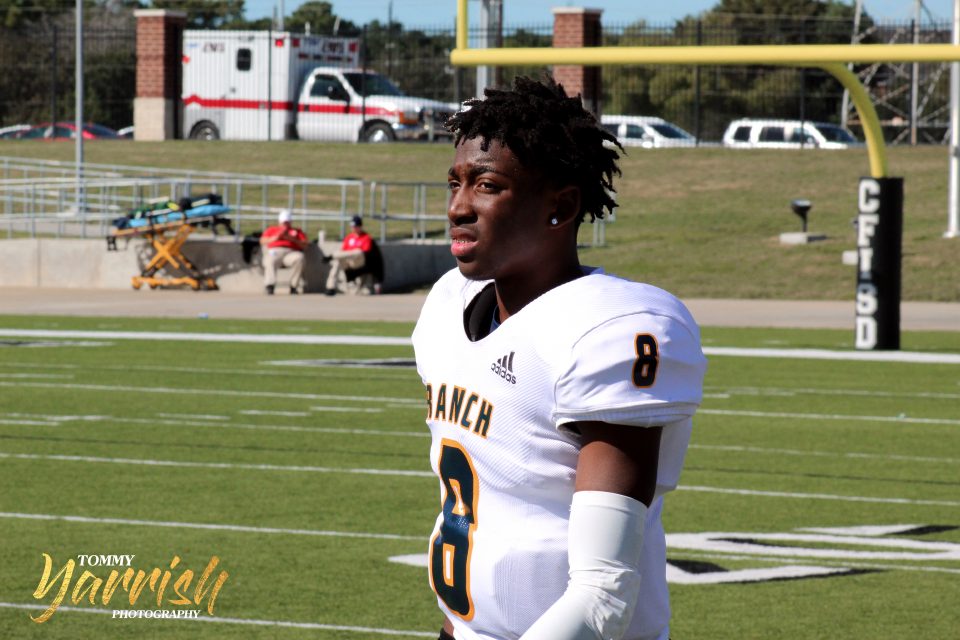 Cy-Fair is already highlighted by several recruits such as Cy-Fair running back LJ Johnson, SMU commits Dylan Goffney and Bryce McMorris, Georgia Tech commit Ben Postma, amongst others. I’ve compiled a list of some players who I believe play a crucial role for their teams, and are underrated. There won’t be players from every school in Cy-Fair, just guys that I have seen play or who’s film I’ve seen in the past week. I’ve linked each of their Twitter accounts to their names. This week, I’ll be focusing on Cy Ranch, Bridgeland, and Langham Creek. In no particular order, here are some guys to watch out for next season:

After starting quarterback Logan McDougald went down with an injury for the rest of the season, Ciers stepped in to the spotlight, and handled it well. The dual-threat quarterback has a cannon of an arm, but I’m more impressed by his run game, he’s though to tackle in the open field. I expect him to have a big senior season for the Mustangs.

Neely stepped up to the challenge of stepping into the shoes of a strong secondary from a year prior, and he did so spectacularly. The hard hitting safety led the district in interceptions last year with six, and earned 1st team all-district honors as well as an all-state honorable mention. He’s going to be a key component to the Mustang defense this season alongside Baylor commit Romario Noel.

With former star running back Willie Eldridge off to UTEP, Kameron Burton steps into the spotlight in the backfield for Cy Ranch. I love his footwork and speed, and he’s able to hit holes in the defense really well. He’s going to keep the run game strong for the Mustangs for the next two seasons.

Motsinger is the leader of an already strong linebacker core for the Bears, as he led the team in tackles last season with 50, and looks to do so this year once again. He doesn’t have any offers yet, but I expect him to rack up several this year. At six foot and 220 pounds and growing, he’s going to be hard not to offer.

Culton stood out the most to me when it came to newcomers on the Bridgeland offense this year, as he tore it up at the running back position in his first varsity season. He racked up 842 yards and 16 touchdowns on the ground, to go along with 161 receiving yards and 2 touchdowns. He might be undersized, but man can he shred tacklers and run. He benches 300 pounds and squats 515 pounds, which is unheard of for a rising junior. I expect him to have a breakout season.

At six foot four inches and 230 pounds, Crippen is an incredibly big, athletic tight end who is tough to cover and takedown. He only picked up 276 receiving yards and 3 touchdowns last year, but was a force to be reckoned with nonetheless. He’s already picked up a few offers, but I expect more to come pouring in this season.

I was extremely impressed with the Lobos linebacker core from last season, and one of the contributors who doesn’t get enough credit is Adrian Owens. He averaged just about 15 tackles per game and is a hard hitter. I love his energy as well as his frame, which is why I’m surprised he only has a couple of offers. I expect him to have a big season alongside his counterpart, Jayhvion Gipson.

Couldn’t find a picture of him, but after watching his film I was really blown away. This guy is incredibly fast, and he hits hard for his size. He can explode out of the secondary to tackle a running back and is impressive in down field coverage. I’m looking forward to seeing how he’ll develop this year.

Also don’t have a picture, but I was really impressed by Murray’s film as well. He’s got incredible accuracy, and knows how to thread the needle even on long range passes. On the JV squad last season, he dropped 1800 yards and 26 touchdowns in just six games. The Lobo offense should be a lot better with him at the helm.