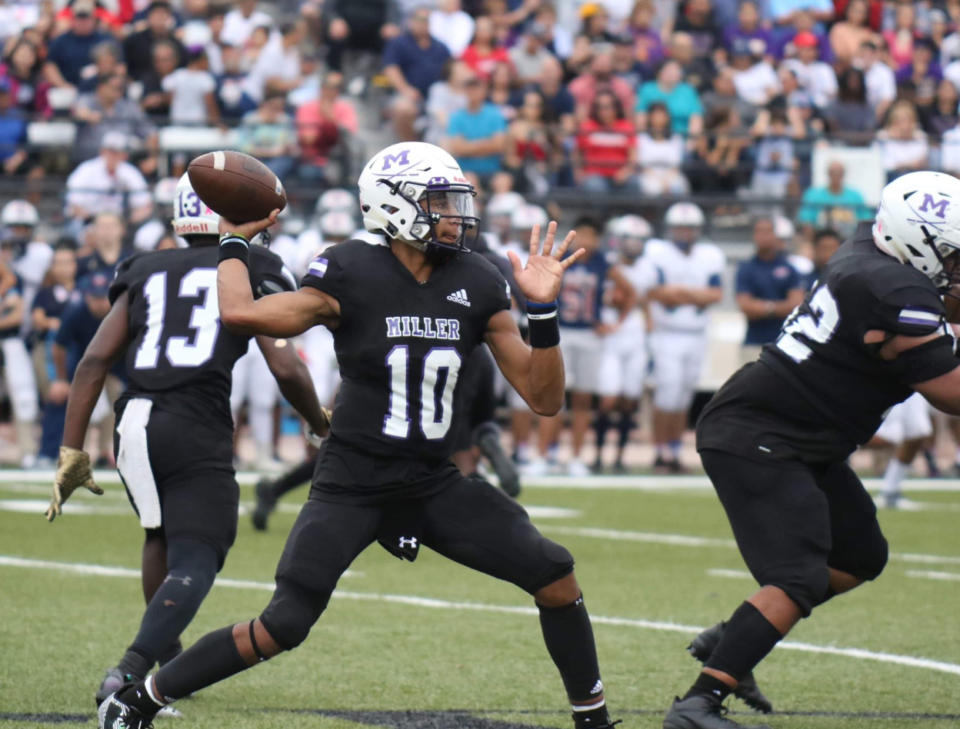 Texas High School Football is full of hidden gems. With over 1,200 football programs in Texas alone it can be hard to stand out or get noticed thus a lot of athletes get lost in the fray. One athlete who everyone should keep an eye on however is Corpus Christi Miller’s quarterback, Andrew Body.

Body is a 6’1” 180-pound quarterback who boasts a 3.7 GPA for Roy Miller High School in Corpus Christi.

Body is going into his senior season and has been starting since he was a Sophomore. In his first year under center, he led Miller to a 5-5 record, missing the playoffs. Last year, he led his squad to the third round of the 5A D1 playoffs and an astounding 12-1 record.

“Hard work and just doing and using everything the coaches tell us, they give us the blueprint and we use it,” Body says on last year’s success.

Roy Miller High School was established more than a century ago in 1892. Yet, in their 128 years, they only hold five state titles. A pair of boys track and field state titles in the late 1940s. Boys basketball in 1950 won it all, and the football team brought championships home in 1938 and 1960.

Andrew Body could very well be the guy to lead Miller to their first state championship in 60 years.

“The culture at Miller is unique, at Miller, everyone is so involved and bought in, everyone supports,” Body said.

If a seven-game win improvement isn’t enough to show Body’s presence on the football field, his stats paint the same picture.

As a sophomore, he completed 60% of his passes for 3,455 yards 34 touchdowns to just six interceptions. He also added another 200 yards and five touchdowns on the ground.

Fast forward to last year, Body improved in nearly every facet of the game. A Completion percentage of 65% for over 4,000 yards with 47 touchdowns to just two interceptions. He nearly doubled his rushing yards as well with 12 rushing touchdowns.

“My key to success is just working when no one else wants to, all my coaches push me to be my best and more,” Body said. “I just try to beat the expectations. My QB coach is always expecting perfection so that’s what I aim for.”

Body and the Miller Buccaneers saw their season end in the third round of the Texas 5A D1 playoffs to fellow CCISD member, Corpus Christi Veterans Memorial by a score of 56-49.

Miller has fell victim to Veterans Memorial in each of the last four years, but their closest games have come with Body under center.

Two of Body’s seven losses are to the Eagles and in those games, he’s thrown for a combined 949 yards on 62 completions for 12 total touchdowns, six in the air and six on the ground. He’s put up 42 points and then 49 points respectively in those two losses.

If Miller wants to take the next step they have to find a way to take down the Eagles of Veterans Memorial.

“I believe that the thing that will push us further this year is our team effort, and how we go into this offseason,” Body said.

Andrew Body and the Corpus Christi Miller Buccaneers are some of the more impressive and underrated stories in the state of Texas. Body is a true hidden gem who’s bound to have another exceptional season in 2020.

“My goal for next year is to surpass our success last year. Play every game and be more precise, and a more disciplined team.”