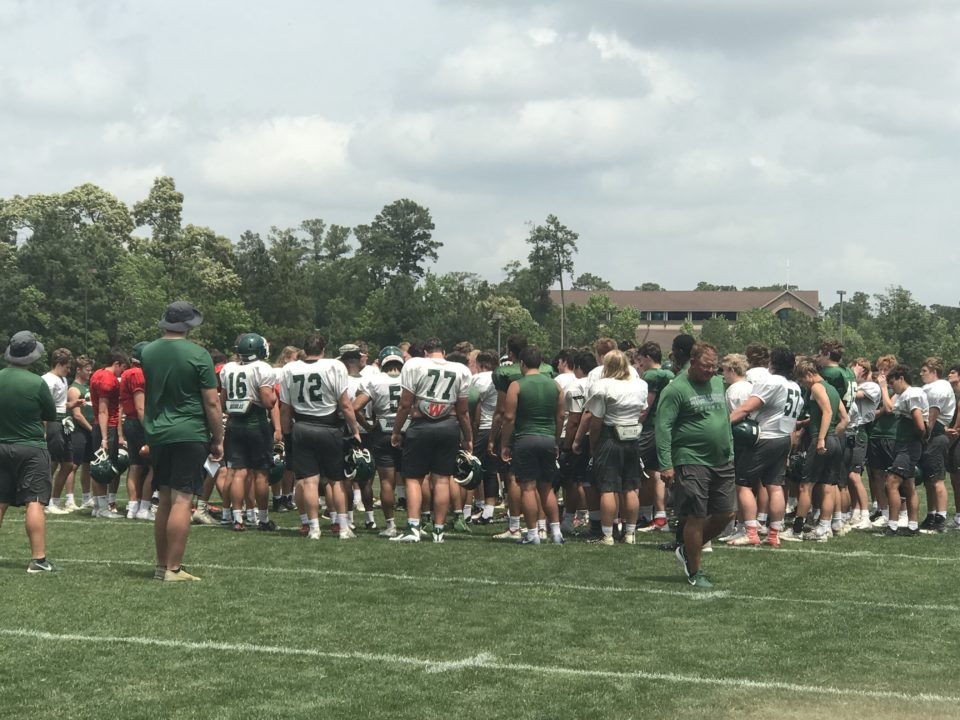 -Outside linebacker KC Ossai steps into the light as the next Ossai brother coming through Oak Ridge. Just a sophomore, Ossai’s built like his oldest brother, Joseph, who’s now at Texas. He stands at just 6’0 but has lengthy arms and a good build with a frame that can be built. As he continues to grow and develop, don’t be surprised to see him get the attention his brother did.

-Coach Derreck Rush is excited by 2021 running back Alton McCaskill and 2020 running back Adrian Murbaugh. McCaskill has developed early, already standing at 6-foot and 180lbs. He’s got good speed and acceleration but can also run between the tackles and get low. He’ll be one the radar as one of the top backs in Houston for the 2021 class.

-2020 OL Austin Harris has moved to center for his senior season. He stands at 6-foot-4 and over 300lbs and is getting looks from college coaches making their rounds. Harris has a chance to shine this season as the centerpiece of the War Eagle offensive line. Expect him to pick up some late offers and potentially find his way to a D1 program.

-2020 The Woodlands wide receiver Malik Johnson is nearing a decision. Not a commitment just yet, but he plans on announcing his top four soon after spring practice wraps up. He’s the cousin of Texas Tech wide receiver Kesean Carter, and the Red Raiders have shown interest. In addition, Johnson holds offers from Nevada, Colorado, Kansas State and Florida Atlantic, among others. Colorado and Kansas State coaches were in the building to watch Johnson. Southern Miss showed up as well and offered the 2020 prospect on site.

-2020 NT/OL Caleb Fox is one of the top, if not the top, sleeper in Houston. At 6-foot-3 and over 300 pounds, Fox has versatility to be a D1 player on either side of the ball. He plays nose tackle for The Woodlands based on a need but took reps at offensive guard during practice to show college recruiters.

-2020 wide receiver Demond Demas was repping Texas A&M at practice and has shown no signs of backing off his pledge. He continues to show why he’s the best receiver in the state and top three in the country—his route running is unmatched and he cuts in and out of routes as smooth as anyone. His body control and ability to go up and get any ball put him over the top. Having moved from North Forest to Tomball, Demas should thrive because of the Cougars’ spread system and his long-time friendship and connection with quarterback Hunter Dunn.

-2020 quarterback Hunter Dunn only holds one offer, from Temple, but continues to garner interest from Texas A&M and others. He’s on the taller end of 6-foot-4 and though he could afford to put on a little more weight, he’s got the build to take and play through hits. He has a very quick release and releases the ball at the high point, which is an added bonus at his height. His connection with Demas could lead to a record-breaking season for the duo.

-Keep an eye on 2021 running back Jermaine Mayes. He already has a good build and he’s expected to be Tomball’s lead back. With recruiters from all over the country coming to watch Demas and Dunn, don’t be surprised if Mayes and a couple other Cougars find themselves with a couple offers throughout the season.