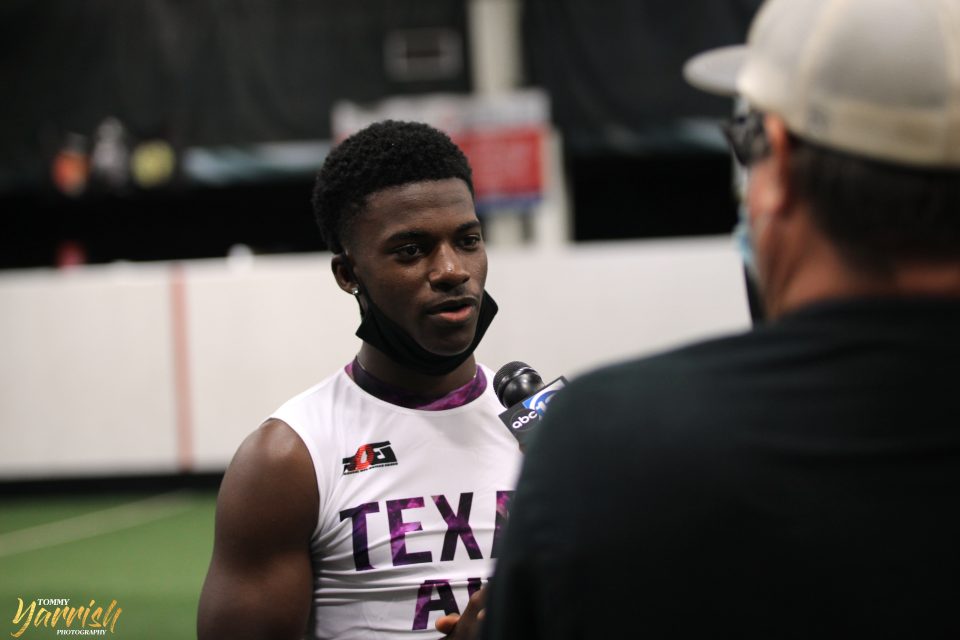 Mike West and David Robinson hosted the Texas Air Assault camp on June 28th, with plenty of prospects showing out and performing well against solid competition. Here are my breakdowns for some of the players that stuck out to me yesterday.

Guidry is in my personal experience, the quickest high school football player I’ve seen. To go along with his speed, he’s got great footwork and flips his hips well which helps him change direction efficiently to burn off any defender that’s covering him, making him the winner of the camp’s wide receiver MVP. Already a state champion, Guidry and the Sharks will definitely be contenders in 6A play behind several stars such as junior quarterback and Baylor commit Kyron Drones.

Guidry has narrowed down his college choices to Nebraska, Houston, and Texas Tech with a commitment set for July 11th.

On the flip side of Shadow Creek’s playbook is Lewis, a member of an elite class of 2022 defenders. He’s really well built and uses his strength to his advantage especially in press coverage where he kept receivers at the line all day long. He’s got some good speed and can adjust to routes well. He’s been working on a variety of skills in anticipation of a potential position switch in the coming season.

“My brakes,” Lewis said on what he’s been improving on in the off-season. “That’s all I really need to work on, and just moving my eyes to the wide receiver.”

Lewis is extremely confident in his team’s chances to win back to back state championships at two different levels of play, adding on that the Sharks would be “back to back” this season with no hesitations.

Garza is a physical specimen that just can’t go unnoticed. The Texas A&M baseball and football commit has incredible hands and speed for a guy his size, and he was the easy choice for tight end MVP at camp. Defensive backs couldn’t find a way to cover this guy, and rightfully so. He’s a big get for Jimbo Fisher and the Aggies, adding on to a great 2021 recruiting class. Heading into his final season at Katy, it’s clear what the goal is.

“Every year I’ve been here, all the coaches talk about is state, state, state,” Garza said. “We’re trying to get that ninth ring.”

Fields was an eye-grabber all day long, as he can really shake defenders right off the line and then use his incredible speed to get open downfield. He may not be the strongest guy, but he more than makes up for it with his speed and athleticism. He committed to Missouri State several days ago and looks to lead a bounce-back year for his high school squad after struggling last season.

“I’m just trying to build my team up, get our confidence back, and have a way better season.” Fields said.

You may think I’m a bit biased because he attends Bridgeland with me, but Goffney is one of the most underrated prospects in the entire state of Texas. His size, speed, and hands are top tier, and the SMU commit showed it all off at camp, eliminating any type of press coverage, and getting open easily. Expect him to rack up more offers heading into his senior season.

Thomas-Keener has everything you need in a wide receiver or defensive back. Size, speed, and footwork were what he showed off at camp, and was a problem on both sides of the ball. Another thing I liked about him was that he was able to realize his mistakes after he made them, and correct them the next time up. Valuable piece for Dekaney this coming year.

Harvey is taking a big step up in his senior season as he takes over for Malik Hornsby at FB Marshall, and he’s ready for the task. He’s got a great arm and was one of the best quarterbacks at camp without question. He showed off his ability to get out of the pocket and run in earlier drills and throws a laser of a ball right where the receiver needs it. A big name to watch as the Buffs try to continue their dominance.

I mentioned earlier on that the class of 2022 had an incredible defensive group, and Friend just continues to prove that. He’s a lock down defensive back, and accomplishes that by using his incredible speed and footwork to keep up with receivers and was able to jump several routes to break up and intercept passes. Expect him to start getting more attention in his junior year with an improving Spring defense.

Owens is in my opinion the best class of 2023 player in Texas. He played wide receiver in camp, and showed that he can be a receiving back when needed. He used his running back speed and strength against defensive backs and was able to get open easily. He’s already earned a plethora of offers from D1 powerhouses like Oklahoma. He’s an all-around great prospect who should be great in college.

Johnkins is already part of a star studded Manvel squad, and he’s part of a great wide receiver room and is coming off a solid junior year. He showed more of his skills at camp, where he used his speed and great hands to be a problem for defensive backs against him. Looking forward to seeing him grow in this next season.